As Joe Bloch has observed, the Greyhawk map has a lot of interesting coastline, unlike boring maps like Middle Earth. This is, perhaps, just a conscious design decision made by Gary Gygax as he transitioned his Greyhawk campaign from the map of North America to an actual commercial product. In place of a big chunk of land in the Flanaess' equivalent of the US South and Midwest, we have a great two-armed sea.

Could be this a homage to the great inland sea that spread over the Midwest in Cretaceous times? Perhaps, but only indirectly. In fact, the sea was far to the west of the present-day Great Lakes. Still, the idea of a North American inland sea would have been known in the 60's from archeology. Its receding phase as the Pierre Sea, shown below in a map by Ron Blakeley, presents an intriguing profile in the spirit of the Greyhawk map. 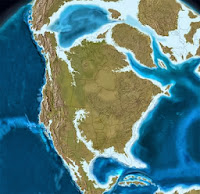 A geographically closer influence, perhaps, is the idea that the Mississippi Plain which stretches up to southern Illinois, surrounded by hills and bluffs on every side, is in danger of becoming submerged. Although mass media often focus on the possibility that California might drown or become an island from the activity of the San Andreas Fault, another equally severe seismic zone is located along the Mississippi. The New Madrid earthquakes in 1811-1812 were the strongest and most extensive recorded in North America.

Perhaps on the basis of this anxiety, a series of psychics since at least 1983 have produced remarkably similar-looking visionary maps of the future North America with huge inundations of California and the Mississippi Valley, often connecting the Great Lakes with the Gulf of Mexico. A risen Atlantis, accounting for sea level rises elsewhere, is optional. A handy compilation of these is provided by a diligent poster on the David Icke forums, although the bloom somewhat goes off these prophecies when you notice that they were all predicted for different dates ranging from 1994 to 2012. Although a little late to have influenced Greyhawk, Gygax had avowedly read up on Theosophy and may have come across the 1940's cataclysmic geographical prophecies of the psychic Edgar Cayce, who attributed his "future map" with a marine Mississippi to a coming pole shift: 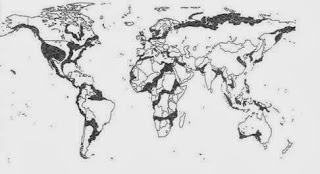 Of course, geological facts make the Mississippi and Ohio river valleys the most low-lying parts of the Midwest, so it is no great stretch to imagine them as the basis for a more watery continent. Indeed, extreme global warming scenarios also put Chicago - the location for Greyhawk in the early campaign - in a position to trade between lakes and sea, with the Ozarks standing in for the Pomarj peninsula: 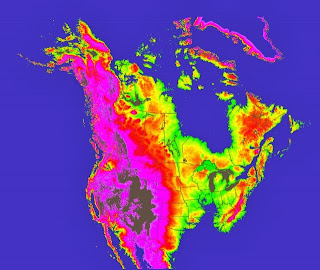 Conspiracy believers, however, generally reject global warming and see the coming Mississippi Sea as the plot of a purposefully evil government, with levee demolitions, sinkholes and FEMA preparations all pointing to the cataclysm, in which a polar shift may or may not be involved. Thus we stand in the 21st Century.

Anyway! All of this suggests a slightly different look to the North American Greyhawk map. Greyhawk and Dyvers reclaim their positions as Chicago and Milwaukee, respectively, and some combination of seismic activity and sea level rise produces this geography, on a scale of 125 miles to the hex: 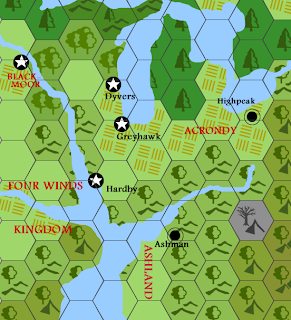 The three cities of the Greyhawk campaign, here, are a buffer between the proud kingdom of Acrondy and the plains realms to the west, while also profiting from north-south trade in raw materials from the woods and mines of the Lakes region. Ashland, from the etymology of Nashville, is a secretive realm ruled by druids and bards, where something real bad happened to blast the mountains in the east. The Four Winds kingdom is a nod to the etymology of Kansas, while Acrondy is a breakaway state from the declining Great Kingdom over the mountains. And somewhere in Manitoba, Iuz weaves his plots ...
Posted by Roger G-S at 11:34