By chance, Michael Bukowski of Yog-Blogsoth has reached a stopping point in illustrating the creatures of H. P. Lovecraft's imagination and is now tackling the creations of an author much admired by Lovecraft - the teller of Christmas ghost stories, Montague Rhodes James (here's his very different take on the monster I statted up as the sack custodian).

I was inspired by this to read through some of James' less well known stories - all available here, in the spirit of Christmas scares.

Largely, there's a reason why the stories in his first collection are better known. The later tales for the most part are still soaked in that wry humor and English antiquarian charm, but require more moving parts, more apparitions and forebodings, to deliver increasingly anticlimactic shocks. James keeps challenging himself to come up with new ideas for scares, but many of these misfire (the haunted curtain pattern in The Diary of Mr. Poynter, for one).

One of these weird ideas that does work shows up in A View From a Hill (spoilers, perforce, follow). The dark secret to be discovered is that of an amateur antiquarian, Baxter, who dabbled in sorcery the better to show up his more learned peers. Two of his artifacts bear special interest for gaming. The first is a little mask ... 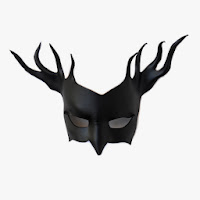 Lawrence was up in the bedroom one day, and picked up a little mask covered with black velvet, and put it on in fun and went to look at himself in the glass. He hadn’t time for a proper look, for old Baxter shouted out to him from the bed: “Put it down, you fool! Do you want to look through a dead man’s eyes?” and it startled him so that he did put it down, and then he asked Baxter what he meant. And Baxter insisted on him handing it over, and said the man he bought it from was dead, or some such nonsense. But Lawrence felt it as he handed it over, and he declared he was sure it was made out of the front of a skull.

The second mystery is a strangely heavy, hand-made pair of binoculars that our protagonist borrows. Gazing through them at an opposite hill, he sees a church and a gallows that had not stood for hundreds of years. As it turns out, this artifact results from one of Baxter's more advanced spells. Their optics are filled with the gelatin of boiled bones from beneath the gallows, which allow their user to "look through a dead man's eyes" in an altogether more modern and convenient manner.

Be it mask, spyglass, or a more modern contrivance, this necromantic item is created with some part of a single dead being's body, and the spells speak with the dead, monster summoning of a level appropriate to the being, wizard eye, bestow curse, and magic jar, as well as 5000 gp of materials. When complete, it has the effect of showing a scene looked upon as the dead being might have experienced it, with typical or memorable activities of the day. (This power proved very useful to Baxter, as he could rifle the countryside for finds undreamed of by his contemporaries.)

However, after the first use, there is a 1% cumulative chance that each further look through the device will bring the attention of the device's spirit, who will then attempt to possess the user and drive him or her to ruin or suicide.

Scary Christmas to all, and to all a long night!
Posted by Roger G-S at 21:55