Who needs a Fiend Folio or Monster Manual II when you have these man-ennobling, straight-from-Syfy, straight-to-DVD chimerae courtesy of Roger Corman? These, of course, are the two best before you start delving into the slum section of portmanteau hell, with the likes of MANSQUITO and MERMANTULA (would have fit right in to MMII,  aquatic version of the Drider, don'tcha know). 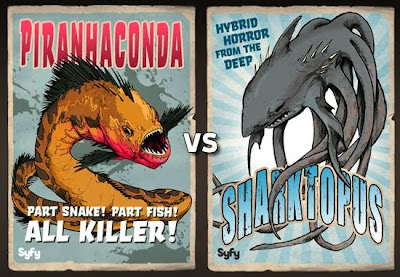 The ecology of this creature ... oh, who am I fooling. It's the modern equivalent of those "WEASELS RIPPED MY FLESH" men's magazine covers from the 1950s. It comes from the id, a shadow-puppet cast to validate extreme measures. Like you, dear two-fisted reader, it attempts to breed with blondes, more or less symbolically.

If a tentacle hits and does 4 damage, it ensnares you and the tentacle has to be attacked separately and killed to let go (4 HP with edged weapon, maximum of 4 damage against tentacle counted against monster's HP). If the bite attack hits and rolls 6+ on d8, Speed/wand/DEX save to avoid being swallowed whole (take d8 acid damage/round, you can do damage each round with sharp weapon, freeing self after doing 1/2 the monster's HP in damage).

This fish-headed semi-aquatic snake makes its constrict attack without counting armor bonus, and once constricting will not stop crushing and biting until you or it are dead. It is tragically misunderstood; drinking hard, on the outs with its wife, and three days short of retirement.

Things can go the other way, too. Hey Corman, interested in "OWLBEAR"? "WOLF-IN-SHEEP'S-CLOTHING"?
Posted by Roger G-S at 02:02