Tales of the Arabian Nights

Here's a game that has given me more entertainment than it really has a right to. This is Tales of the Arabian Nights, the 2009 Z-Man Games remake of a 1985 West End Games production. 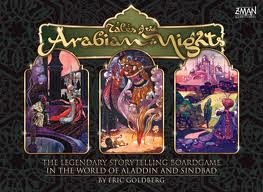 It's a board game, but the real engine is a huge Book of Tales with over 2000 numbered paragraphs. You roam a map representing the Old World as seen from the caliph's Baghdad, playing one of the Arabian Nights characters (Sindbad, Ali Baba, Scheherazade, etc.) Every turn you pull a card from the encounter deck, roll a die on a table to see what you get (anything from a House Fire to a Vengeful Efreet), and choose an action to take appropriate to the type of encounter (anything from Grovel to Court).

The player on your right checks a matrix and reads out a paragraph number, which the player on your left looks up in the big book and reads out loud. This paragraph sets out the situation, and may give better or worse results according to what skills your character has. Goodies you may get include Destiny Points and Story Points (which help you win the game), fabulous treasures, or improved skills. Balancing these out are the infamous "status" cards that some paragraphs hand out. Among other things, statuses can leave you cursed, turned into an animal, sex changed, diseased, or more ambiguously married (you get point benefits but have to stick close to your family's city).

The version I have is the 2009 remake, which hugely improved the graphics and doubled the number of paragraphs in the by now enormous Book of Tales, but did little else to streamline the game design. Indeed, a number of design choices still seem odd or not well thought out, with the quirks and complexity of the 1985 design mentality. Some encounter cards have different results for the second or third time through the encounter deck, but in my experience games often end without ever having to reshuffle it. Although the 2009 version makes official the 1985 version's "quest" variant with a deck of quest cards, these take on the role of directing play across the board, so that the city encounter cards, which give bonuses on reaching a particular city, now seem like an unnecessary afterthought. And the rule for dealing with the "expert" level of skills, in which the book reader has to scan the adjacent paragraphs for uses of that skill and switch to them, is still clunky. 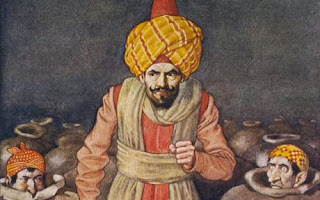 All the same, I think the game has to be defended against one of the major criticisms you see on Boardgamegeek and elsewhere, which is that it's a random rollercoaster ride that doesn't reward strategy. I think this is actually a psychological effect, where the game is designed so that action choices don't always lead to the logical consequence or skill opportunity, so that even though the majority of outcomes have some logic to them, the ones that don't stick out in the memory and lead to the perception of the game as meaningless. But the alternative is to have a game where the Rob action always leads to a use of Stealth and Stealing, and so on, which is also not fun.

More to the point, this game is a litmus test. If you are able to enjoy taking part in a picaresque story full of reversals and randomness, Tales will be highly rewarding, and filled with "wow" moments like gaining fabulous treasures, visiting mysterious and climactic Places of Power, and those times when the random story elements come together in a coincidental, funny way - for example, when you just can't stop having encounters with that seductive efreeteh and her jealous efreet boyfriend.

The replay value, too, is higher than I expected, having played it four times in the past few months. The sheer number of paragraphs, the random elements that interfere between an action choice and the outcome work in its favor. So does the Poisson-like distribution of events - so that many common events tend to recur, like house fires and hunchbacked beggars, but the truly special things like Places of Power are much rarer. This is the principle used in most encounter tables to balance meaning and surprise in a world, and its use in Tales means that the game is not entirely guilty of presenting a complete random carnival of events.

Finally, Tales is unique in design in the game world, in spite of the suitability of its basic concept for a more convention sword-and-sorcery picaresque. Does the requirement to have a hundreds-of-pages paragraph book scare off designers? The Dying Earth world, I think, would be particularly ripe for such treatment.
Posted by Roger G-S at 11:34