Text to Tabletop 1: Return to the Colossal Cave

The next few posts - with inevitable digressions - are going to be about links between old-school-style D&D and text adventure games.

It's been at least 10 years since I played a computer text adventure. I got into them big-time in the last few years of grad school and first year of my postdoc.  At the time I was pretty much as far from gaming mentally as any time I've been in my life. Yes, text adventures were gaming, but a lot of people were taking them as some form of postmodernist enterprise, and being literature, it was cool, so OK. (This is what living in Manhattan will do to a soul.)

Apparently text adventures were an early branching off from pre-1975 Dungeons and Dragons. Add puzzles, creatures and treasures from D&D to some real-world experience of spelunking, and a hit is born. You can read the whole story here on Rick Adams' excellent site about the very first text game, Colossal Cave Adventure. Or read this even more excellent article on spelunking the source code and source cave.

Adventure, Zork and their text adventure kin have a lot in common with the old-school approach to tabletop gaming. For example, both text adventures have a fair amount of humor and mild surrealism in their dungeon settings, mixed with scenes of horror and wonder. This matches well with the gonzo atmosphere from Castle Greyhawk that so many are trying to recapture these days. 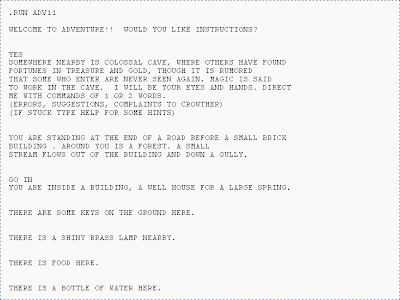 What's really important, though, is the path of divergence in problem-solving these games took. Adventure and Zork could very well have taken up the wargame roots of D&D, incorporating hit points, damage, combat, and saving rolls. For various reasons this was left for other games to do - most memorably the seminal Wizardry.

Instead, text adventures were about verbal manipulation of the environment. You tried different things with the dungeon features and the items you picked up along the way - "pull rope," "cut rope with sword," "burn rope with torch." There wasn't a live DM, so you didn't always get an answer. Sometimes the program knew what you were doing didn't work. Sometimes it did work, and you could move on to the next part of the adventure.

If this sounds familiar to someone steeped in the old school renaissance, it should ...

The above example of diceless resolution from Matt Finch's Quick Primer for Old-School Gaming translates to this kind of text-adventure play - although the referee and the programmer have very different ways of interacting with the player:

> look table
You see nothing special.

> look chairs
You see nothing special.

> look moose
A stuffed moose head is on the wall. You might think its eyes are following you, but they're not.

> look moose in mouth
A stuffed moose head is on the wall. You might think its eyes are following you, but they're not.

> push moose
You slide the moose head to the side, at first hesitantly. There is a secret compartment in the wall behind it.

The next few posts are going to explore some implications of the text adventure mentality for refereeing and playing old school games, leading to the next pdf download - something I've been working on called The Bottomless Bag of Tricks.

Anyone else feel like reminiscing on the old text adventure games? Drop a comment!
Posted by Roger G-S at 22:16