Sword and Axe: The Mythic

The mythic aspects of the sword and axe flow in part from their function. The rest is history and religion.

The sword is the weapon of killing, dedicated to nothing else. It is purity, oaths, knighthood, kingship. It is the blade of fine cutting, interpreted in the Tarot pack and Buddhism as intellect and discernment. Blind Justice wields it. It is an angelic weapon, by association with the flaming sword placed east of Eden to guard the Tree of Life.

It is magic to Iron Age cultures - because sword technology seemed magic in the Iron Age. Perhaps this is why magic swords are cooler, more prevalent, more interesting in D&D than any other kind of weapon. It is a ritual weapon of the magician and the priest. (Ritual, I emphasize.)

It is male, direct, patriarchal. It is shaped like the Cross. It is holy - at least until Michael Moorcock turned the idea on its head. Its use in execution is reserved for the nobility, in Europe and Japan alike.

A priest of the sword gains the right to carry this edged weapon but at a terrible price. He cannot heal; his curative spells become open, bleeding wounds, cast through the metal of the sword and deepening its strikes. 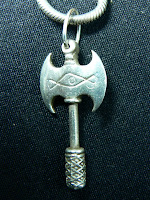 The axe is the weapon of the people, the earth, the Minoan mother-religion, the labyrinth, the bull-cult. It is moon, blood, wildness. The double-bitted axe is seldom seen on the battlefield, ceremonial, double-facing, double-speaking. It is female power.It is the armament of the Minotaur.

Single-bitted, the axe is a barbarian armament; it is thunder, force narrowly concentrated.

A priestess of the axe seeks out the deep places of the earth, but reserves her holy weapon for the object of her quest, the dark sacrifice. Healing and wounding are all the same to her. She may not summon light, but knows a charm for seeing in the dark.
Posted by Roger G-S at 22:48