The following couple of posts on social and military naturalism are a compression of recurring observations from writers on the history and recreation of pre-gunpowder warfare. I'll give a few of my key references at the end. 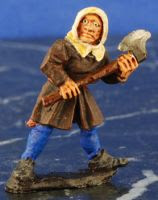 Axes were cheaper. There is less metal in an axehead than in a longsword. Don't think of the ridiculously inflated weapons wielded in computer or miniatures games; battle axe blades were narrower than that, playing to their main strength of delivering compressed force, as we shall see. More importantly, a longsword blade that is resilient and not liable to break has to be forged according to arts that must have seemed almost magical, with repeated layering and folding of the blade by a master smith. An axe head just has to be hammered out of a block of metal and sharpened; you can even make an axe out of stone.

Axes were more common, too, in the social sense of the word. In Iron Age societies and other places and times where metal was rare, swords required so much expense and craft that they became prerogatives of the ruling class. Looked at another way, a sword has no use except in war and dueling, while most other weapons including the axe have a civilian use, either as tools or in hunting. So, an axe is a good investment for a yeoman soldier in peace and wartime, while a sword marks you out as a professional warrior. Even when swordcrafting became more widespread and almost industrialized, as happened eventually in Europe and Japan, aristocracies promoted their association with the sword, to the point of legislating it out of the hands of commoners.

If we stop here - roughly at the point of OD&D, where axes are equivalent to swords in damage but cost less - social and material reasons favor the cheaper axe over the more expensive sword. A campaign, though, may want to give the sword some of its social meaning back to compensate. So, wearing the more expensive sword may be a claim to aristocratic status, which adventurers can buy or loot their way to. For example, axe-wielding barbarians and woodcutters may not be welcome in a certain tavern or town, while sword-wearing folk are presumed to be gentility and allowed to pass.

If social class is used to distinguish players in the game, having to use more expensive things, like swords, may be a drawback of the greater resources available to upper-class characters. At the same time, upstarts wearing swords may draw the respect or fear of common folk, but the wrath of those who feel more properly entitled by birth to do so, and may even fall afoul of the law. All these options are suitable for a campaign that wants to keep its combat simple but its social world fairly rich. As long as the advantages and drawbacks are communicated to players beforehand, that's perfectly OK.

Real commitment to super-simple combat would stop here. But I also want differences between weapons to count in combat, even if expressed in only a couple of features. So, more next time.
Posted by Roger G-S at 00:55