The first edition of the Legend of the Five Rings collectible card game, 15 years ago now, had a card in it called the Demon Bride of Fu Leng.

(Fu Leng, with its resonances of Rohmer and Lovecraft, was the name of the evil god in that Japanese-inspired epic fantasy world.) 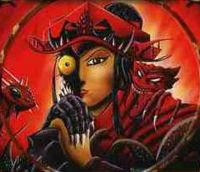 The Demon Bride's stats were as follows:

Force 1, Chi 2 (very bad at combat, and not much better at dueling or resisting effects)
Honor Requirement -, Personal Honor 0 (outside the system of honor and politics entirely)
Her abilities were:
Limited: Bow the Bride to take control of and attach any one Shadowlands Follower in play.
Battle: Fear 4 (bow all Follower cards with 4 or less Force in a single opposing unit).

If you don't know the game, you'll have to take my word that these were very unimpressive abilities-particularly in the early days when Followers were seldom if ever played.

The Demon Bride's cost in the game? 12 Gold. By contrast, for half the cost you could usually get a Samurai with 3 or more Force and Chi, and a better ability, who was in your Clan (so could join you for 2 less Gold or gain you honor in the game).

What was going on with that design? For that matter (getting back to D&D) what was going on in those editions where the battle axe was clearly an inferior combat option to the longsword?

From the viewpoint of the player making choices to customize his or her game puppet (the play deck in L5R, the character in D&D), this is just unbalanced design. The Demon Bride and the battle axe form dead areas of choice. They are options never taken rationally, and in a world created by the decisions of gamers, they would not exist except as quickly discarded evolutionary dead ends.

Often, as game designs evolve, the designers become more conscious of this game layer and begin to take it into account. Both D&D and L5R over their editions have become games whose elements have consciously been maneuvered into some semblance of cost-benefit balance with each other. A card as underwhelming as the Demon Bride would not see print today - especially not as a valuable rare card.

There are, nonetheless, three answers sometimes seen in defense of a Demon Bride design.

First, they reflect that not every entity is equally balanced in life. Maybe the Demon Bride really is an inept and vain infernal consultant who charges three times her actual worth. And hey, maybe the battle axe really was a worse weapon than the longsword, and can be recommended only for its cheaper price - still more of a balancing factor than the Demon Bride's inflated cost.

Second, they cater to the flavor and roleplaying desires of the fans, so why care if they are perfectly balanced? If you want to build your Fu Leng theme deck, you will throw in the Demon Bride anyway. If you want your barbarian fighter to swing an axe, then by gum, so he will, even if he can have no shield and always strikes last. And who knows, maybe in a game you'll see one of those magic moments where a character or weapon everyone thought was worthless saves the day.

Third, the unbalanced design may revolve around factors that are not part of the game. The Demon Bride's Gold cost reflects her power and influence in the infernal hierarchy, not reflected in L5R's Honor-based  political model. The axe was great for punching through armor, especially in the late Middle Ages; but the basic D&D rule set doesn't take that into account.

As you might guess, I am not partial to any of these three excuses. But I'll leave it for next post to explain why.
Posted by Roger G-S at 00:04