Power Gamers at the Gates

I should probably make clear in light of my last post that the kind of unbalanced game options I was referring to - demon bride, battle axe and whatnot - are typical of an imaginative game in the early stages of development. In this kind of game the player tends to just ignore the mechanics; he or she reaches across them and makes peace with the world being simulated. In that idyllic Golden Age, the lion lies down with the lamb; or at the very least, Cure Light Wounds lies down with Bless in perfect harmony. And then the power gamers arrive and start asking impertinent questions and tearing things up. 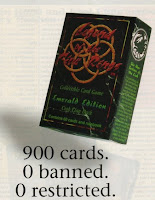 Alderac's Legend of the Five Rings CCG had its Golden Age roughly until the Spirit Wars expansion in 1999. The first three years of the game were an incredible high of story and world involvement for the players, culminating in the epic story-game fusion of the Day of Thunder tournament whose result determined the outcome of the storyline and the identity of the new Emperor. The temper of L5R fans was oppositional. Many saw themselves as refugees from the evil, money-grubbing power gamers who infested the much more popular CCG, Magic: The Gathering. Magic's own Golden Age of wonder, discovery, and gross imbalance in card design had been much more short-lived, and was definitely over by 1997.

In that year, the unthinkable happened: Wizards of the Coast, Magic's company, bought out the L5R property, retaining the Alderac team to handle design and story. The storyline was continued past the Day of Thunder (it had originally been scheduled to end then, with the company then focusing its efforts on a kindred Arabian Nights-style game, Legend of the Burning Sands). Wisely, Wizards chose to promote L5R as a more clubhouse, storyline game so as not to compete with the serious, high stakes Magic tournament scene, and the players went along for the most part.

1999 saw the release of the final Wizards expansion, Spirit Wars, followed by a long limbo as Alderac tried and eventually succeeded in buying back the game. In that year, too, the first signs of power gaming made their appearance. Day of Thunder champion Chris Bergstrom posted a card-by-card review of Spirit Wars, separating ruthlessly the sheep from the goats and exposing just how unbalanced and ad-hoc card design seemed to be. And the first teams based on competitive play instead of story concerns - Bad Player at first and later, The Dynasty - were coming into their own.

The rest, as they say, is history, and after a wild roller-coaster of varying power levels L5R now rests comfortably on a well-developed design template. Of course, in a game where over 500 new elements (cards) have to be released every year, absolute balance can never be achieved except by accident and even then only temporarily. The best a designer can hope for is the appearance of balance. Each option should have something to recommend it and a rough equality between drawbacks and advantages to the naked eye. Leave it to the power gamer to make the fine distinctions.

Even in a non-competitive game like role-playing - and I hope nobody out there is actually running role-playing tournaments - the options in a robustly designed game need to survive this eyeball test. Ask yourself: would you let a first-level cleric ever take Purify Food and Water instead of Cure Light Wounds into an unknown dungeon? Even if a table is full of fun-loving and setting-immersed souls, the system itself should be resistant to the power envy that comes about when you realize that your choice, as flavorful as it is, is flatly inferior to another player's choice, with no compensation.

Put another way: a power gamer is one who carefully weighs the game costs and benefits of each option on a scale, and picks only the best ratio. A regular gamer is just someone who wants to make sure there is something in each pan before picking. You can design for regular gamers without capitulating to the demands of power gamers. And you shouldn't capitulate - because you can never balance the game enough to confound them.