My World, Your World 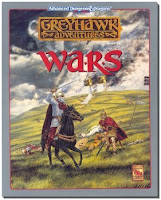 I have recently been looking over some of the online material about the World of Greyhawk setting, inspired by Grendelwulf's compilation of the army lists for most of the eastern map, and contemplating bringing back to life the campaign system I used in high school to game out the Herzog's invasion of the Iron League.

But what struck me about the history of Greyhawk is how similar some of the issues are to the Legend of the Five Rings setting.

There is a tension in every setting between "My World" (the company's) and "Your World" (the customer's). Setting-neutral games like D&D, of course, avoid this to a large degree by letting gamemasters play god to the full extent and shape the continents, religions and kings of their own little realm. But for others, there's the attraction of letting someone else do all the grunt work of fleshing out a setting. What's more, if the setting becomes popular enough or derives from an already popular fictional world, you have the coolness factor of gaming in THE Middle-Earth, THE Star Wars Galaxy, THE Forgotten Realms.

Or is it really cool? I never really got the appeal of big franchise settings. There's nothing less interesting to me than gaming where the jobs of world savers and earth shakers have already been filled. OK, Frodo is taking the Ring to Mount Doom, but we're fighting wolves and investigating a haunted tower over here in west Eriador. Whoopee.

Setting the game in the past or the future of the fantasy world doesn't quite work, either. In the past, you're still conscious of continuity. You really need a setting where history is cheerfully rewritten and stability is the norm, so a campaign set in the past won't cause too many time-ripples. John Wick used this to good advantage in setting his L5R role playing game in a peaceful era before the events of the Big Storyline. Many gamemasters took this opportunity to present their own alternative versions of those great events, to keep the players guessing and maybe even able to alter history.

In a future campaign set after the big story events, the temptation is to replay the Apocalypse over and over again or risk anticlimax. Then even the Apocalypse becomes an anticlimax no matter how many times the stakes are raised, former enemies become allies, and so on. Legend of the Five Rings fans and Star Wars novel readers know this all too well.

See, what roleplayers need is a setting sufficiently fleshed out to spare the GM hard labor, but sufficiently skeletal to develop with a free hand. The original World of Greyhawk and even the 1983 reissue were perfect for this. Big blank expanses of minty green hexes, generic medieval backdrop with a wide range of realms and terrains, enough quirkiness to be memorable.

But inevitably sclerosis sets in. Game companies, like academics, must publish or perish. So in come the sourcebooks, splatbooks and supplements, filling in the blank expanses. Novels have to be sold, too. Someone decides that what this world needs is more drama, and an Apocalypse shows up. The iron weight of Canon is lowered, and your games are no longer free; they have to bend to the megaplot.

There are rumors that TSR unleashed the Greyhawk Wars to ruin Gygax's creation after he had left the company. While there may have been some spite to the proceedings, there was no such rupture with Ed Greenwood, and yet the Realms fell to much the same temptation.

It's a natural process brought on by the business model of the industry. L5R roleplayers continually grouse about the apocalyptic canon being forced on them, story arc after story arc of a collectible card game that advances its story through tournament results and, like the shark, will die without constant movement. They may complain, but the card game funds the role playing game, not the other way around. In fact, the latest edition of the roleplaying game has wisely gone back to being timeline-neutral, so that sourcebooks can still be sold without forcing the action to happen in the current era.

When all is said and done, in any given living room you, the GM, are sovereign. It's your responsibility to bring surprise to whatever the players do. If they want to play in Middle Earth, OK, but all bets are off. Build an alternate story where the Ring is a red herring, the shards of Anduril are the real McGuffin, and if the players screw up all of Middle-Earth goes to hell.

There are reasons why published material has to stick to canon. It's the long fingers of copyright lawyers and estate guardians, and the rabid hordes of Internet fan-sticklers. But they can't see into your living room. Use that freedom.
Posted by Roger G-S at 23:32