The Grand Mysteries: Gold and Brown

With this post, the spell lists and mysteries come to a close.

I just want to give a peek at what's coming next. I have come to the conclusion that a) magic systems, especially sacred magic, imply a lot about their setting; b) I would rather present material that covers a variety of possible settings; c) there are three main ways that D&D campaigns typically treat the metaphysical world; d) each of these ways understands alignment differently; e) the understanding of alignment is crucial to the way sacred magic is handled.

So starting with a discussion of alignment, we are eventually going to end up with spellcaster classes and lists for three different template worlds: Sorcery World, Pantheon World, and Church World.

And now, the final mysteries of chromatic magic.

The Grand Mystery of the Golden School: The Angel of Resurrection 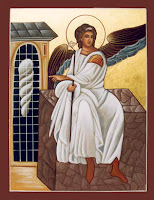 "Mercy given to those who deserve it not? That is the act of the fool, and of the Most Sublime" - so goes the saying that distinguishes Mercy from Justice. In the Golden School of healing and helping, the greatest mercy is contained in the Mystery of Resurrection - the restoration to full life and freedom of those long dead, or imprisoned on some far-off plane. The Angel, so the holy writings attest, need only hear the name and understand the identity of the person to bring him or her back in an instant.

Such power, exercised wholly on the behalf of another, nonetheless has its risks. Those who carefully read accounts of Resurrections will see hints at a toll taken upon the master who has invoked the Mystery - a diminishing of life in some way, the same risk of painful death as a woman in childbirth, a mysterious growing lesser even as the restored person strides about the world and grows greater.

There is also a more insidious shadow underlying the Great Golden Mystery. The simpler miracle of Raising the Dead merely calls back the spirit from its journey to the afterlife; the Resurrection brings the whole being, body and soul, back from its existence on another plane. It is precisely the unworthy - those condemned to the torments of Hell, or to the tedium reserved for the noncommittal - who most rejoice in their new life; but such people may not be properly grateful to their rescuer. On the other hand, those of good will are plucked from paradise, and the consequences of that shift are unpredictable. Saint Yvale used her profound understanding of this Mystery to have the Angel revive the legendary hero Ragnuoth at a time of great need for the Cities of the Wood. Ragnuoth, alas! had spent five hundred years purging his wrathful sins, and stepped forth as gently as a new-hatched chick, content only to tend the wounded and stir the gruel kettle while the Cities burned.

The Grand Mystery of the Brown School: The Genius of the Earth

The final arcanum of the Brown School is certainly not something that mankind has created, so much as approached. It is spoken of as a place, an impossible place for those who do not hold the surest command of the earth and elements - a deep cavern with no entrances, a chasm at the heart of an impassable and corrupted forest, a circle of stones in the lightless and crushing depths of the sea. Perhaps in each of these places the aspirant may find one face of the Genius of the Earth, and learn from it the mysteries of the First Things, of magic before reason or revelation.

Great indeed must be the determination of the aspirant to learn these things and not feel compelled to settle down as a hermit, Protector of some sacred part of the Earth. Indeed, some who have studied the Transcendence doubt that the Brown School's Mystery is necessary to attain it; it is a dead end, they claim, a primitive first stab at magic whose final revelation ends up chaining its master to the Earth.

What is clear is that a master of the Brown School, settled or no, possesses immense powers over the whole natural world, tending towards its preservation or restoration. The best-known legend is that of the proud city of Cithar, Cithar of the high-helmeted swordsmen, who sought to honor its founder by sculpting a nearby mountain peak into his likeness. They knew nothing of the nameless Protector who held that peak as holy. A year later, Cithar was a wooded jumble of hills and rocks, inhabited by tribes of pointy-headed monkeys hitting each other with sticks, the carving's one finished eye left on the mountain peak as a grim warning.
Posted by Roger G-S at 09:11