The Grand Mysteries: White and Black

Flip back here for rationale, and move here and down for the other colors' Grand Mysteries.

The Grand Mysteries of the sacred schools of magic, White, Black, Gold and Brown, are not carved on a cobwebbed tablet in the cellars of any ruin. The quest for them must needs involve the Divine, if it exists in the world; or at the very least, must involve a contact with a Principle higher than one's own mortal self. That Divinity, that Principle, may set additional tests, quests and trials before the Mystery is revealed. Attaining a level, at least three higher than that required to cast the sixth level spells, is recommended. Beyond that, the use of each Mystery is shrouded, though their power and dangers tend to make them once-in-a-lifetime choices.

The Grand Mystery of the White School: The Angel of Justice 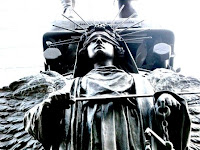 The Angels of sacred magic are Presences that embody a Principle, within or beyond the Divine. Any manifestation of them to the senses is both fleeting and profoundly awe-inspiring: a vast shadow, a footfall with a sound as of an army, an addictive smell of petals and incense.

The White Angel champions the principle of Justice. Its Mystery consists of a petition to right a wrong, balance the crooked, forgive a mistake. The aspirant before this Angel must be sincere, must be persuasive, and above all must be right. The powers of Justice are legendary and approach those of the fabled Great Gray Mystery, the Wish.

But the White Mystery represents a fearful departure. Until now, the White powers of the aspirant have not been used impartially. They have been used to protect self and friends, blast the evil and those considered evil. The danger of the White Mystery is this: that justice is impartial. Justice may not see things your way. "Give back the children of Vadia the Notched Rose," petitioned her former comrade, a mighty hierarch whose name is lost, "it is not just that the plague should take all three but leave the mother to grieve." And, miracle! they came to life; but as they stood restored in the graveyard, passing goblin bandits slew them, just as Vadia had slain goblin children without mercy in her days as a freebooter. The decision of the Judge is final.

The Grand Mystery of the Black School::   The Angel of Death 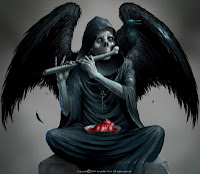 This is the deciding point for the practicioner of Black Magic. All the grimoires bound in human skin celebrate this achievement as the Triumph of Death, the chance to sit on a skeletal throne and rain vengeance down upon enemies heretofore distant or resistant.

A different possibility is mentioned by the few White Magic scholars who choose to mention the dire Angel of Death. Having abused, defiled, and added prematurely to the ranks of the dead many times over, the necromancer, approaching this Mystery, is given a final choice to stand with the Law of the Universe or defy it. In defiance, he is granted a grim, land-ravaging Triumph full of dancing corpses and tolling bells. But no true Angel of Death appears, just a lawless counsellor spawned of the sorcerer's own desires that will eventually either destroy him or condemn him to eternal misery as a lich.

With submission to the Law, the Angel appears in true aspect as Monarch of the Kingdom of the Dead, and grants the necromancer a painless, instant, inviolate death. In exchange, he may take with him three mortals by name, whoever or wherever they may be.

One Black tome (the fabled and possibly spurious Melanchiridion) claims it is possible to swear to both Law and Chaos, and reap eternal undeath that can end when it becomes wearisome, together with three flawless assassinations. Whether any aspirant has tried this audacious move, the Melenchiridion does not say.
Posted by Roger G-S at 08:25