Speaking of science fantasy and "OSR is dead/has won" proclamations, here's what Monte Cook is up to these days. Best concentration of info is in this series of posts. 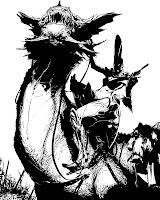 Science fantasy: The Numenera game is Earth, one billion years hence, and that could mean anything. Clearly, this is an adventure game, not an exercise in the manipulation of sixth-dimensional solids; so there are people and peopleoids around, barbarians in the ruins, challenges best overcome by short-range violence, stuff indistinguishable from magic. Monte name-drops Jack Vance, Gene Wolfe and Michael Moorcock, but the focus on artifacts and ruins has me thinking also of Empire of the Petal Throne - down to the acute accent on the "e" in the Numenera logo, with its echo of the similarly accented Tékumel.

OSR has won: Remember 3rd edition D&D monster stat blocks? Monte was one of the designers, but now he gives a public recantation, and promises simple systems that ease GM improvisation and rulings. There are a few implementations of Old School talking points: resource management (though of personal stats, not equipment and henchmen), the three Fantasy Trip stats that everyone seems to keep re-discovering, experience for discovery.

Story games have won: Numenera also boasts a heavy infusion of story/indie/Forge concepts - character definition by natural-language terms, for one, but most importantly a system of challenges and forfeits between player and GM. Experience points are given for going with the flow of a plot or accepting a difficult development, and can be spent to refuse such a thing. There are a lot of precedents for this. Here, the ability to bend reality and shape the narrative reminds me most of the challenge-and-forfeit system in James Wallis' highly enjoyable proto-indie-game Baron Munchausen.

What's my reaction? Science fantasy is cool, I guess, but details are sparse. The key concept seems to be nanotechnology, which is not the most exciting revelation*; remember midichlorians? There's more promise in the visual sketches of the world, where mysterious shrouded figures lurch in shadow beside gargantuan, misshapen dray animals. Explicitly influenced by the likes of Moebius, this hints at a welcome change from the every-strap-and-armor-spike esthetic in mainstream fantasy gaming art.

As for the story-old school hybrid, the tradeoffs are pretty clear. Gone is the illusion of a pervasive and coherent world that a skilled, authoritative GM can provide. The players are more aware of the fictional nature of the world, of their role as co-authors, their characters' roles as puppets. If the DM informs you that wild apes have descended from the roof, and you spend an XP to make that not happen, can you still erase that image from your mind? I see more advantage into having XP spent to make something equally awesome happen in your favor (the apes are taxidermic decoys, put there just to frighten us!) No doubt this set of rules and their use will be the most controversial aspect of the system.

Anyway, the kickstarter is successful enough that Numenera will evidently be a game to be reckoned with in 2013.

*Exception made for gray goo apocalypses like Wil McCarthy's Bloom.
Posted by Roger G-S at 23:29