Funny Things Happen On The Way To The Dungeon

Two different experiences over the past weeks show the value of respecting the likelihood of random encounters on the way to and from the adventure site. 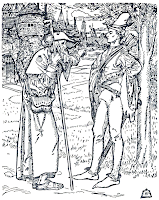 One was the Red Box NYC adventure I took part in the other week. I didn't mention this at the time, but the whole adventure emerged from a random encounter we had with some minions of a rival adventuring guild. After that fight - in which a white dragon also randomly appeared but, being known to the established PCs, was bought off by their deep pockets - a captive spilled the beans on the location of the guild's treasure warehouse. The adventure then revolved around a raid on that warehouse. In a chat afterwards, DM Tavis Allison noted that he is a strict stickler for encounter rolls going to and from adventures, contributing to the sense of a living, unpredictable world.

The other was the game I ran for my brother-in-law's family in upstate New York after GenCon, just as I had done 2 years ago. The character sheets and maps being dug up again, there was a short period of henchman handling and hiring, then off to the Castle of the Mad Archmage. The random encounter roll on the way came up a "1"; it was a patrol from the "Invisibles" bandit gang in the castle, 6 members or 2/3 of the gang's strength.

The gang attacked without parley, despite being outclassed in the missile department. The combat went well, with bandits dropping, a few wounds but no fallen comrades, and the leader finally surrendering abjectly when surrounded. The group then decided to go back to town to heal up their damage, sell off the spare weapons and armor of the dead bandits, and turn the live one over to the law for a bounty.

Now, I have heard tell of this "15 minute adventuring day" and how it can turn games into cancerous masses of anti-fun, so wouldn't you expect everyone to ball up their character sheets in disgust and quit the game? Wow, that didn't happen. Perhaps because a Vancian wizard was not involved. Anyway, everyone agreed that retreating, regrouping and going out the next day was just plain smart tactics. But the consequences of their random encounter were not yet over.

You see, in the Gray Keep of my Castle, the Invisible gang are in an uneasy truce with the Skull Stackers bandits who operated there some 25 years ago and re-spawned when the Castle did. My judgment was that the bandits had each agreed to send out a raiding party of about the same size in opposite directions, so the balance of power would be kept. When the Stackers' party returned and the Invisibles' did not, open and uneven battle broke out, with the Stackers attacking. This was the situation when our heroes returned to the Castle the next day. Shouts, catcalls, and the sound of an axe chopping into a door echoed from behind the tall wall of the Gray Keep.

To make a long story short, the party ended up taking the fleeing Fergus and his two remaining bandits under their wing, only to surround and betray them, the bounty on live bandits being too much to resist. In the ensuing short fight, Fergus lost his foot, the bleeding stump stanched by the party druid's healing, and was handed in to justice - the other two bandits having fled.

Did I let the random encounter get in the way of My Precious Dungeon? Of course not. The encounter was a thing in its own right, establishing the reality of the campaign world and eventually interacting with the prepared encounters in a satisfying way.

I must confess, though, that as much I appreciate encounters on the way to the adventure site, the rolls for encounters on the way back are often skipped in my campaign. In real life this is usually the time when we are about to wrap up and I'm not as inclined to leave a cliffhanger combat at that point in the session. Although maybe I should - any thoughts?
Posted by Roger G-S at 06:42

Email ThisBlogThis!Share to TwitterShare to FacebookShare to Pinterest
Labels: ACKS, castle of the mad archmage, cellars of the castle ruins, encounters, play report