It's one of the most ancient of board game mechanics, going back to the Egyptian Senet. It powers the most beloved family board games, from backgammon to Parcheesi to Monopoly. Yet rolling dice to move is almost completely absent from the geekish world of hobby games that has sprung up since the 70s.

Random determination of movement stands out as the easiest and most fun way to run a race game. Certainly, there are other ways. For example, the almost-luck-free Hare and Tortoise is deceptively complex for its kiddie theme. Movement depends on managing a hand of carrot cards which can be used to fuel movement. The "mileage" gets mathematically less efficient with greater speed. Picking up carrots depends largely on predicting your position in the race when the next turn comes. 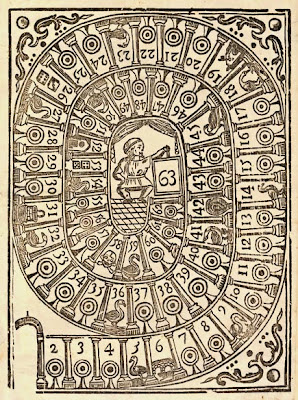 However, board and miniatures wargaming took a different turn. Military science in the 19th century emphasized the predictability of troop movements, gunnery and logistics. The rates of march tables from military manuals were translated to fixed movement distances in military kriegspiel. Wargames in the 20th century picked up these habits. Although combat required dice to resolve, being seen as necessarily uncertain, how you got there was seen as a much more predictable process.

By the time wargames evolved into roleplaying games and fantasy board games, the cultural divide between serious and family games was clear. Figures in serious games were going to be moving at a fixed and stately pace. Even the exceptions confirm the rule. Avalon Hill's Titan, for example, used random movement on the highly abstracted strategic board but fixed movement on the more detailed and war- gamey tactical board, as if to flaunt the hybridization of the two models while keeping clear what each one was for. Milton Bradley's family-oriented HeroQuest was a dungeon crawl where your movement rate was the roll of two dice. However, fixed movement could just have easily been used and the movement dice had little impact on play most of the time. Again, this choice betrays the association of random movement with light, family-style gaming.

But there are good reasons to make movement random in some way, even if you're aiming for simulation. On a strategic level, whether a small party or a huge army, a movement roll can easily reflect all the myriad mishaps and inefficiencies of day-to-day travel. Greater expertise in logistics or terrain should be able, too, to reduce some of the slower results. On a tactical level, combat is an ever-shifting field of dangerous weapons flashing, opportunities to lunge, divided attention and obstacles underfoot. With this in mind, it makes more sense to have movement be in some way random, rather than carefully plotting out a steady distance each turn before your one allotted attack.

Some game systems today acknowledge that randomness in movement is part of simulation. Most often this is done through a command control system, where the uncertainty is less about how much a unit or leader can move than whether it can move at all. This has always been a good feature of the De Bellis Antiquitatis family of wargames, for example, and also plays a part in the very popular family of card-driven conflict games that began with Hannibal.

For skirmish combat in role-playing games, the main drawback of random movement is added time and strategizing to roll, for not a lot of payoff. I find, actually, that the amount of movement that can be done even in a very short 6 second combat round is sufficient to get most figures from one end of the effective fight area to another, so varying this really adds very little tension or strategy.

However, I'll make an obvious exception for contexts where it could be important, like charging to close or better yet, a chase. I recently commented on the 9 and 30 Kingdoms blog that chase scenes are the one form of contest that are most under-served by adventure game rules, especially traditional ones. The main culprit is the insistence on fixed movement rates. Clearly, this is what "roll to move" was made for.

Next post I'll consider some options for making chases exciting. In the meantime, check out the system that Talysman came up with in response to my comment.