In a class-based RPG, who should be able to do what? Let's divvy up the job of the dungeon crew into:


And introduce the basic class types from Advanced and Basic D&D (left to right, fighter, magic-user, cleric, thief, then dwarf, elf and halfling): 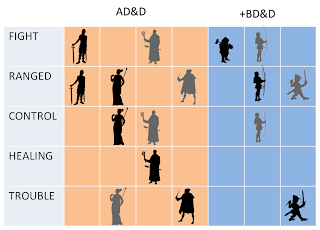 The chart should be self-evident. The thief is a bad ranged attack class, in AD&D anyway, because it's restricted to the one-a round sling rather than the two-a-round bow. Yes, the cleric has some troubleshooting spells, but in practice they're overwhelmed by the impulse to stack multiple heals and Hold Persons. You could also see the dwarf class in Basic as a kind of troubleshooter, although limited, thanks to stonework abilities, dark vision and the ability to fit into small places.

If I could graphically show each class/job as a profile over levels, you'd see the thief starting with weak and unreliable abilities, while the magic-user eventually far surpasses the fighter as a ranged shooter. For now, it's enough to comment on the things that this chart reveals about the "original game":

1. There's a fairly obvious bottleneck where the cleric (or variant classes)  is absolutely necessary for healing. This combined with the other abilities of the cleric make it a golden class, yet often derided as "boring" because of its support role. I'll get into why healing is so great in another post, but I'll leave it for now with an observation that experienced players know the cleric is a must-have member of the party.

2. The thief also has a fair monopoly, with the wizard's troubleshooting powers at low levels being one-shot and limited. This doesn't tell the whole story across levels, though, and this is why the A/BD&D thief is generally considered weak. At low levels the thief's abilities are pretty terrible, while by the time that  thief gets up to reliable powers, the magic-user is starting to learn troubleshooting spells of a whole new class - invisibility, fly, ESP - that completely overshadow what the thief can do. The only drawback is that to memorize those spells means to forego more combat-oriented ones. Adding insult to injury, a wizard throwing 3 darts a round is a better back-rank shooter than the thief with 1 sling bullet, even leaving aside the wizard's ranged spells.

3. Dwarves and halflings in BD&D are pretty much redundant with the base classes, but elves are their own thing.

Just for grins, here's the chart for the Wizards versions, showing how little 3rd edition changed this picture (except for the welcome step of making rogues competent ranged attackers finally) and how much 4th edition changed it, to the well-remarked "anyone can do anything" soup. 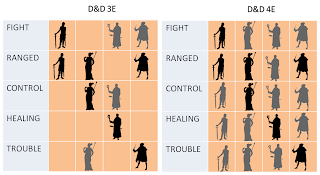 Now, what do I want for my game? Some designers see it as a virtue to specialize each class further, so that the optimum party contains all four. Others see it as a virtue to allow variety in party composition, so that no one class is strictly essential. James Raggi's Flame Princess rules are built on the former assumption, though in practice his improvements on Basic D&D has more to do with the profile of ability across level; making only fighters improve in hitting, and making specialists much more viable in what they do early on than rogues, for example.

Recent experiences in play have shown me how dependent on the prophet class and its healing abilities my parties are. This is a little embarrassing because prophets are supposed to be rare, semi-outcast members of society. The urge is to stick in another class that can heal; thus, recently, the druid. I don't think every class should do everything, but I do think everything should be doable by a choice of two or more classes. Call it the two-class rule.

So here is the chart for my 52 Pages system, and more info can be found on each class under this search. The system assumes that characters' hit points are more like "heroic courage and luck" that gets worn down in combat, so "healing" hit points is actually a matter of giving a sufficient pep talk. 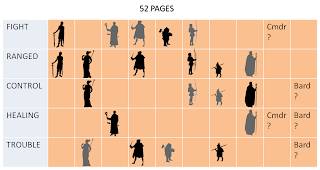 With this in mind, two classes beyond the prophet and druid might qualify for HP restorative powers. One - a commander-type based on the fighter, kind of a secular paladin.

The other ... I shudder to mention it ... is the bard. Now, I want to have this class in my game, it makes a lot of sense, but please let it be anything but the bard, or the other awful alternatives (minstrel? gleeman?). Seriously, I would rather have a jester class doing this than a bard, and that's saying something.
Posted by Roger G-S at 18:00