"The problem with this new generation is that they grew up on computer games that hand everything to them. They don't have the gumption for old-school play!"

This is a common enough sentiment, but I had to question it recently after reading this article by David Wong. Granted, he admits to "pushing 40," but most of the computer games he mentions are hits from the past 10 years. And some of his criteria for a great moment in computer game play seem lifted straight from the Old School roleplaying ethos. Such as: 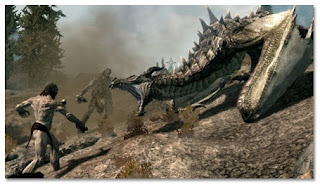 These are all ideas behind old-school naturalism: the world is not composed of carefully measured, player-centric combats and artificial puzzles. You are let into a world where things can overpower you, where there are problems not puzzles, and you have to use all your guile, stealth and good judgment to survive. The computer gaming examples Wong gives here would also make great experiences in tabletop gaming - for example, running from the dragon only to have it fight the giant.

But here's my suspicion: there hasn't really been a change with the generations. Maybe there's less tolerance for pointless grinding at the tabletop because of the ready availability of electronic timewasters. But running a naturalistic world always has taken insight and a certain amount of grit when faced with the players' desire to win. Steering clear of pointless reward and pointless sadism as a DM - and of the self-consciousness that you might be indulging in one or the other - has never been easy. It's also not easy as a player to stick with such a campaign, even though it ultimately brings deep rewards.

You can see from the fulminations of Gygax in the AD&D books that many of his contemporaries ran overly easy "Monty Haul" campaigns. Dice fudging is openly discussed. Clearly, not all old-time players had the Old School mentality. And evidently, a minority of roleplayers today embrace it.

This way has never been mass-market - which is why Mike Mearls feels the need to surround his old-school advice in D&D Next with a slew of padded safety mechanisms. That's OK; those of us who care know how to unbolt the training wheels.
Posted by Roger G-S at 00:05