Monster Ability Scores on the Fly

As teens we played two roleplaying games: D&D plus variants and Runequest.

Runequest was attractive because it felt more realistic. But it was a pain to create adventures for, which is why we didn't play it all the time. The magic system was restrictively Gloranthan, but worse yet, each individual monster had separate stats that had to be rolled up.

Because it was AD&D, the two systems came off about the same in complexity, but at least in AD&D the DM could create a monster our of thin air, or throw a few ogres at the party without blinking. D&D was a system thrown together from a number of unrelated wargames. Runequest was a system that sought to simulate the world consistently, simplifying some areas (skill resolution) at the cost of others (monster generation).

3rd and later edition D&D assimilated the Runequest mentality with the triumph of consistency over ease. Skills got easier but monster statblocks grew fearsomely big.

D&D Next seems to pare down the monsters considerably but retain the "consistency" approach. Monster saving throws are ability score-based just like characters' and if you want to wrestle a gray ooze, its Strength is a known quantity.

Mike Mearls, to his credit, realizes that this can work out awkwardly in practice and gives the option to just wing ability scores. If your gray ooze's strength is a few points off, that can always be explained away ("He was a big strong ooze, even as a little puddle").

But here's my alternative, on the page of my large-print heartbreaker that explains monster stats. The relevant section lets you compute monster abilities from other parts of their statblock like move and hit dice. I also use descriptive terms like "nimble" and "frail" that should be easy to apply. 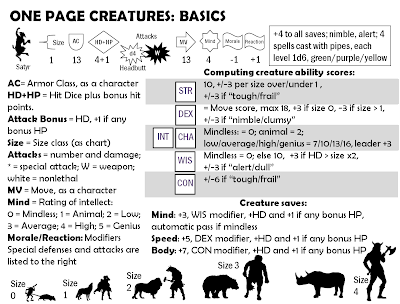 I'm not sure if a simple algorithm for each stat is less unwieldy than just looking things up in the monster book, but at least it can give you some things to think about when improvising monster stats for Next/5th. Me - I'll work toward not requiring ability scores for monsters at all. And anyway, this exercise has got me moving again on the 52 Pages.
Posted by Roger G-S at 20:58