A Strange Class of People ... The Druids

Thinking it over, there's one more core class I want to add to my system. The Druid. Here's how they fit into the evolving scheme of classes in my game. The bold ones are the core classes, for now, and the others are expansions.


If I was trying to be super-parsimonious with this scheme, I would put druids as midway between clerics (prophets) and wizards - where witches are. But I see druids as deserving of their own slot. They're alterna-clerics, serving an older religion, more tied to nature. They also use charisma as their prime stat, unlike any other class and further distinguishing them from prophets.

How to make them more than just an outdoorsy Aquaman-type? Give them stuff they can take underground, and things they can do, and hook them up quickly with the primal elements. If they can speak to plants, why not to slime molds?

All right, so here's the basic class with a couple of variants. Basically, they can restore hit points as a cleric does (a kind of morale boost for PCs) but can't use magic to heal actual injuries at 0 hp or less. 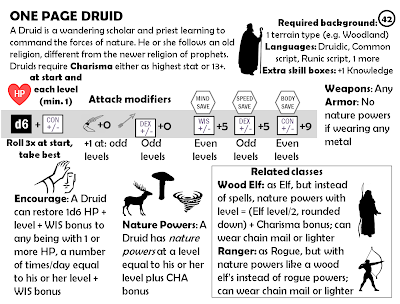 And they get nature powers: 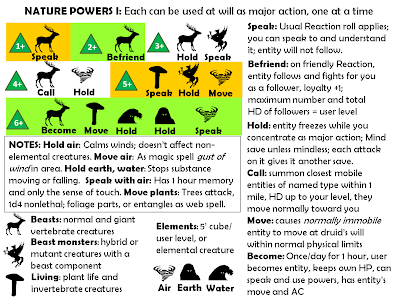 This follows the trend of divine-type powers not being spells, but per-day or at-will in other ways. One principle I maybe need to make more clear is that "speak with plants" is not some all-consuming intelligence spell; although plants have a longer memory than earth, their senses are also restricted to touch. They might tell you someone ate their berries five hours ago or a lot of heavy feet passed by yesterday, but that's about it.

I'm not including these in the 52 Pages of my system just yet (the Basic-level document), but have developed them because one of our elf characters acquired an elf henchman and I was looking for ways to make this wood elf a little different in play. Hence, the powers and the classes.

Next: Two popular class/race-types I didn't put in the diagram and why not.