Nigerian Hyena Keepers Are Definitely Weirder Than You Think

While researching hyenas I came across an amazing photo essay on a troupe of animal handlers in modern-day northern Nigeria. 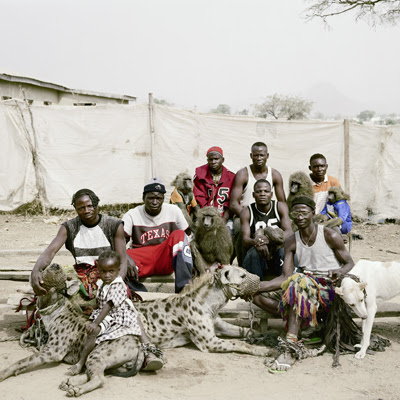 The Gadawan Kura are street entertainers and peddlers of traditional medicines and amulets, which they use to capture and tame the hyenas, baboons and rock pythons they use in their act. Minus the athletic gear, but keeping the bright piebald kilts of their trade, they would make a great set of NPCs in a fantasy game.

One version of the troupe:
Hyena handlers Usman (rogue-3) and Danjuma (rogue-1), both men in their early 30s, with 2 female hyenas and 1 subordinate male
Baboon whisperer and drummer Jalil (0 level), a young man around 20, with 2 baboons
Snake charmer Khamisa (magic-user/witch-5), an old woman of 65 or so, with a large constrictor rock python and a small poisonous asp
Girl, age 6, Zainab

Their treasure is about 300$ in a sack, plus their drums, medicine and herbal stash, but they have 2000$ - a family fortune accumulated over many generations - buried in a field somewhere closer to home.

NEUTRAL: They have learned how to make potions, powders and amulets of animal warding and control, and other uses (healing, for example). They sell these substances at the market rate, demonstrating their effectiveness with the animals. In every respect they are wandering opportunists, with no higher aim except to make money and see the world.

VILLAINS: They are actually the shared operational arm of two sets of demon cultists; the baboons and snakes are familiars of Demogorgon while the hyenas are familiars of Yeenoghu, all with low cunning and the ability to speak human language. The baboons are used for thievery and burglary, having relevant skills at 5th level; the snakes for assassination; the hyenas for security, intimidation, and bone-crunching corpse disposal. The traveling medicine show is just a front, the potions fraudulent.

HEROES: Usman is an exiled prince with supernatural talents of animal friendship, which he inherited from his mother Khamisa, and which brother Jalil and daughter Zainab share. Danjuma was the court astrologer, the only one to remain loyal after the coup.  The troupe may help the party, compete with them in an adventure, or hire them as mercenaries when Usman decides it's time to start the revolution back home. The use of potions and powders is a pretense to cover up the troupe's true abilities.