Level titles are cool. They give the same sense of achievement and specialness as the level titles of real-world secret societies: the Mithraic cult, the Freemasons, the Golden Dawn. 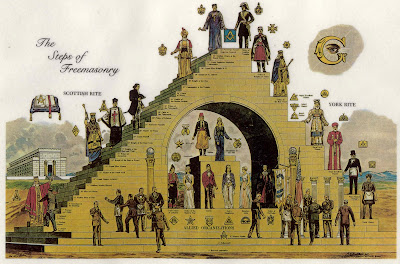 But what if you paid money, not to level up your character, but to give him or her the cool level title?

Granted by a secret or not so secret hierarchical organization, level titles represent your social advancement by dint of your donation of loot to their worthy cause. As an adventuring member, not tied to any place but useful to the society, you can only have a level title equal to or less than your actual level.

Benefits from societies vary. One way to model this simply: having henchmen requires membership of one society or another. Other ideas: they can be approached for interest-free loans proportionate to the title, are a source of equipment and adventure opportunities, provide "death insurance" in the form of raise dead spells, are necessary to the ultimate endgame by giving land or political capital for the characters' stronghold.

At this point there are two ways to go:

1. Separate society choices for different character types and classes. One character rises in the Thieves' Guild, another in the Wizards' Academy, yet another in an order of knighthood.

2. The same society for all, an adventurers' freemasonry - perhaps with different titles for different professions, but without the party-dividing drawback.

I think the first option is more "realistic" but the second option has more game advantages. It binds the party together, removes the worry that one guild or cabal might be more advantageous than the other.

If I get enough response I'll whip up a sample adventurers' society that gives out level titles - the Order of St. Hermas.
Posted by Roger G-S at 12:39