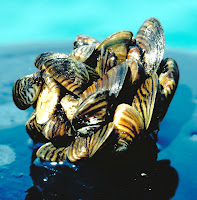 A short note. These clacking monstrosities are the result of the persistent victimization of my nascent Dwarf Fortresses by a nearby dwarven necromancer and his gang, the Crewed Rags.

Emblematic of the procedural insanity in that game (as is, indeed, the very name "The Crewed Rags"), the logic is very simple. If a necromancer can raise the hard remains of any being into a living skeleton, then the remains of your shellfish feast are not safe ... and neither are you!

Indeed, those who cast Animate Dead near a kitchen garbage pail or close to yesterday's clambake are at risk for unleashing this horror on the world; truly a sight to chill the ... ah ... the cockles of the heart ...

Each 5' square of the swarm is a separate entity with its own hit points. The swarm is turned as a ghoul.
Posted by Roger G-S at 23:17