The Business of Settings: Also Dysfunctional

Steve Winter (via Grognardia) posted some very apt thoughts on the inherent self-destructiveness of the business of selling RPGs. Because most buyers are players, the optimal economic move is to market more and more options to them, until the game eventually collapses under the weight of rules and choices and requires a reboot.

My reaction at first was, "That's true for games like D&D that focus on their mechanics and largely let players come up with setting material. But what about games like Vampire or Legend of the Five Rings that are strongly tied to a story or setting? Won't players buy setting-related material just because of curiosity and desire to follow the story?" 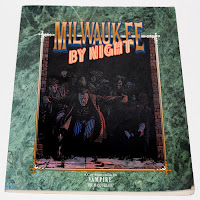 Then I realized that this "exception" actually proved the rule in a big way. Settings, too, are prone to glut. As more and more canon details are filled in, there is less and less room for maneuver in actual play, less potential for the surprise and discovery that is a major drawing card of this kind of game. In place of a sense of wonder, you get lengthy forum screeds from canon nerds pointing out the atrocity of Shareena, Fire Guardian of the Blood City, having a daughter in supplement X-22, when in AG-14 it clearly states that Fire Guardians of the Blood City are sworn to perpetual virginity.

I mean, have you seen a map of Greyhawk lately? (And they're wonderful ... but also restrictive canon in that once-wide-open world).

So the GM forbids players to buy setting books, or read setting material. Leaving aside the enforceability of that, it also undercuts the business case, because setting material goes back to being the less lucrative GM-only kind. And if the GM announces that the game is a home-brew and nothing canon should be taken for granted, then what's the point of the players buying the official material?

Eventually - and this isn't just in RPGs, but any world that generates a massive crust of setting detail - the need to purify and cauterize the setting takes hold, and you get the likes of the New World of Darkness. And the cycle begins anew ...