As I take a breather in outlining my color magic scheme, it's interesting to note that Lord Kilgore has done a pretty neat conversion of the spellcasting classes and traditional D&D spell lists to the five colors of Magic:The Gathering. 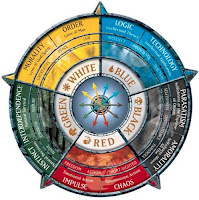 It's worth noting that each color he comes up with is a viable class unto itself with a variety of different effects. I've been taking more liberties with the spells and my colors function more like the "Enchantment, Abjuration, Illusion" categories from AD&D on.

In the meanwhile, click to enlarge the image at left and consider how the five colors in Magic could also be an alignment system ....

Addressing how my color spectrum can be combined back into classes will be my last point, after I outline the four remaining schools which have been more associated with traditionally clerical or druidic magic. I've decided that those schools don't need what was looking to be a five-post preface on alignment as a proper introduction. The issues of Protection from Evil and so forth can be postponed if I just substitute "Unholy" for "Evil" and let the definition of that be open to the GM. It seems like too much of an imposition on the referee's handling of alignment to do otherwise, especially when the options have multiplied in the proliferation of retro campaign settings and rulesets.

I may be posting a little less often in the coming month. I have a lot of travel coming up, including New York City and GenCon. I hope to be able to share some of the gaming experiences with you all ...
Posted by Roger G-S at 00:13