Below the primary colors of magic, Red, Blue and Yellow, are the secondary colors, Green, Purple, and Orange, which each correspond to a different aspect of the mind. 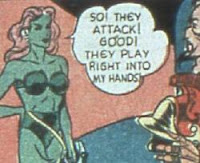 The passions and desires of living beings are the mental phenomena covered by Green School magic. Green spells create emotional states and bend the mind to the caster’s will. As a fundamentally deceptive and controlling discipline, Green magic can exert a morally corrupting influence which must be guarded against, even if used for benevolent ends. Green magicians tend to be social game players; they are careful about their appearance and move easily in human society. On a modern university campus a Green wizard would be teaching Experimental Social Psychology or Politics. The symbol of Green magic is the seven-petaled rose and its guardian planet is Venus.

Causes a human, demi-human or humanoid creature facing you who fails a saving throw (Wis) to regard you as its trusted friend.

Makes affected creatures within a 20’ diameter area fall asleep for the duration of the spell without saving throw. The spell affects up to 4 Hit Dice (or 8 half-hit dice) of creatures, but each creature must have equal or lower hit dice than the caster’s level. Lower hit dice sleep before higher, and if there are too many creatures, who sleeps and who does not is determined randomly. The spell can also be cast on a single willing subject to ensure a deep, hour-long sleep with the beneficial effects of a full night’s rest.

Causes an intelligent being to act on the strongest impulse that he or she is currently restraining – for example, attack a hated foe, flee from danger, or lecherously paw a nearby nubile person. The spell works best knowing the target’s desires and inhibitions, but obviously, can also reveal them. The target gets a saving throw (Wis). The spell can be reversed, without save, to help resist temptation for a much longer time. In terms of morale rolls on 2d6, the effects of this spell translate to -2 (or +2) if working with a temptation to flee.
Posted by Roger G-S at 23:52