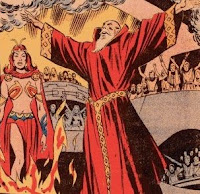 Red wizardry is the summoning of uncontrolled, dynamic forces of energy in all its manifestations. Red spells are heavily oriented towards causing damage. Wizards who specialize in this magic are valued as battlefield assets. The practice of red magic leads to a hot temper and a tendency to see problems as solvable by violence, which tends to either be tightly regulated by personal discipline, or erupts into madness and chaos. On a university campus, Red wizards would be the reserve officer trainees. The planet of red magic is Mars, and its shape is the pentagon.

Creates a source of bright, day-like light with a 60’ illumination radius, either on an object or in the air. If cast on an unwilling creature’s body, it gets a saving throw (Dex), and the spell only lasts 3 rounds. Blinds a creature if cast on the eyes.

Brings into being a small explosion of flame that does 1d4 fire damage to each creature in a 10’ cube who does not make a save (Dex). The flame will also ignite flammable objects.

Imparts magical force to a small object about the size of a coin, causing it to act as a deadly missile that flies out and hits its target with no save or “to hit” roll for 1d4+1 damage. One additional missile may be thrown for every 2 caster levels above 1st.
Posted by Roger G-S at 09:05