Sacred Magic is the name collectively given to three Schools of Magic - Black, White and Golden - whose effects and understanding are associated with the Divine order. 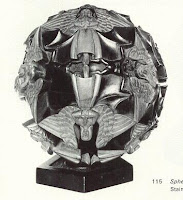 The purpose of White magic is to protect life and well-being, through the metaphor of light.

The purpose of Black magic is to bring an end to life and well-being, through the metaphor of darkness.

The purpose of Golden magic is to restore life and well-being that has been destroyed, through the metaphor of the Golden Body, flesh and blood.

The relationship among these magics, alignment, religion and morality is complicated at best, and depends heavily on the world travelled to. For now, accept a promise to sketch out some ideas later that fit the Schools into varying worldviews, from Christian to Pagan to Taoist.

I use general categories here of "Holy/Unholy" things and creatures, which you may define at will. But one of the key decisions that can't be ignored when describing magic effects in the theology of a campaign is whether the two are:
I'll assume here a symmetrical world, but the way to change it is easily shown; I'll put any symmetrical effects of Unholy vs. Holy in [square brackets].

The essence of these Schools can be summed up in these variations on a popular first level spell. Yes, Cause is ranged and not touch (but you get a save); it should be one of the baddest damage spells out there, not something that requires you hit and does as much damage as that mace you are holding in your hand that by the way also doesn't require a saving throw.

By touching a being, the caster protects him or her from any form of damage to hit points other than permanent drain. The protection will negate the first 1d6+1 hit points of damage taken by the being from any source within the duration, rolled openly. The spell also protects, while it lasts, from an additional and equal amount of hit point damage from black magic attacks or from physical and spiritual attacks from Unholy creatures. Tally this amount separately, subtracting unholy damage from it first, before the more general pool is tapped.

By pointing at a living being, the caster inflicts a horrible wound in the flesh if the target fails to save (CON bonus). The wound does 1d6+1 hit points of damage. [Double this amount if the being is Holy.]

By touching a fleshly living being, the caster heals him or her of 1d6+1 damage.