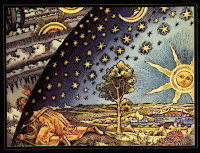 Maybe you can tell from my last post I was kind of getting tired of the idea that all the high-level spells should be codified and splatted out there for all players to see and figure out from day one. It's the same kind of instinct that makes me loathe the "Deities & Demigods" approach to divine power. If everything can be reduced to a known stat block, then everything can be munchkinized, starring now at a delayed-adolescent power trip near you. Power and knowledge should not translate to omnipotence or omniscience, at any level of viable play.

In other words - let's see more of the approach taken by the 1st edition Dungeon Master's Guide, when it presented the abilities of its legendary artifacts as blanks, waiting to be filled in idiosyncratically for each campaign.

Anyway, the comments gave me some neat ideas for how to suggest designing magical schools and societies. And this makes me realize that the most helpful thing I can do is provide tools for people to customize, rather than dictate how everything works exactly, because magic systems are so inevitably tied up with a GM's own ideas about the setting.

And now, the last spells you learned about in any kind of detail from your classes at wizard school.


As you gain character levels past, um, whatever level your version of the rules has you learn your first 6th level spell at, you still gain spell slots at level 7, 8 and so on. But those are just so you can memorize powered-up versions of level 6 and below spells, using the Gray School booster effects. New spells at those rarefied levels are not so easy to gain ...
Posted by Roger G-S at 20:43