Getting into the powers for each of my One Page classes, I'm graphically illustrating some of the combat-relevant powers with icons representing the combatants and terrain, on a five foot = 1 inch grid. I fully expect a few people to react with five-foot-square-latter-day-edition-phobia, so let me explain. 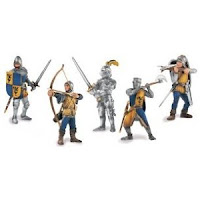 I know the role of miniatures in D&D is an evergreen Old School debate topic, right up there with ascending armor class and evil PCs. I don't think the debate has been properly framed, though. It has been about miniatures, but it should be about graphic displays.

"You need miniatures to play D&D" immediately brings up anxiety about blown credit card limits, trying to get every monster you're using in the campaign, having to paint up the damn things, anti-corporate grumbling about required additional equipment. None of this has to apply to other graphic displays, like pennies marked with Sharpie on a dining room table, or whiteboard drawings updated on the go. Sure, the more you invest, the better it looks, but does anyone limit their encounters to their miniatures collection? Sooner or later, orcs are going to have to stand in for lizardmen, chess pawns for extra goblins beyond the 5 or 10 you own. This "miniatures" thing is a red herring.

Another red herring is the allegedly abstract nature of the D&D combat rules. Come, I will show you an abstract combat system, and its name is Tunnels and Trolls. No locations, no maneuvers, just who's fighting and who gets hurt. D&D only looks abstract as a combat game because it's a kludge, an exaptation, a hybrid of naval and tabletop wargame rules that became obsolete as an accurate simulation of skirmish warfare the moment Runequest came out. Hit points and armor class are for ironclads, the whole idea of incrementally taking damage from a large pool is a better model for large units than individuals, and various other things like the one-minute round and missile rules with assumptions more suited to mass than skirmish archery also betray the game's battle-scale roots.

It would be impossible for such a battle-based system to ignore the various situations that need accurate positioning to resolve: flanking, a charge versus a missile-firing unit, breach of a line. At the most basic level in D&D are similar questions. How many PCs can attack the monsters? How many monsters can attack the PC's? Who's in front, who's safe and who's vulnerable?

People generally accept the relatively fine grain of time in D&D combat, rather than resolving all in one chuck of the dice, because it gives leeway to make tactical decisions as basic as "should we stay or run?" And this, in turn, is because combat is a common and lethal activity that players need to have spelled out for them. It's OK to have the DM rule "The wall is too slippery, you can't climb it" but not OK to have the DM rule "The mummy is too strong for you, he kills you with a single blow."

I'm genuinely curious, though: if you don't use some kind of visual aid in a D&D-like game, how do you keep track of what's happening to the same standard? The abstract solution sounds fine, right up until the point where your players' view and yours diverge. In a world of 10' passages, 5' doorways and marching orders that might never happen. But neither will this scenario where tension, fun, danger and the unexpected are a direct product of the characters interacting with the scenery. Even Ludovico Ariosto, the Renaissance poet and author of Orlando Furioso, used model knights to help choreograph that epic poem's climactic three-on-three battle on the isle of Lampedusa. 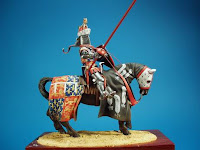 Bottom line is, if you're communicating with the players, why give up the ability to illustrate the action in ways that work together with words? I'm not sure but I suspect for some the urge is to flee the figures, the toy soldiers, the wargame roots of D&D and embrace something seen as more mature and story-like. That's not where I want to go, though. For the adventure game I want to play, figures on a map do best to regulate the tension and strategy of knife's edge combat.
Posted by Roger G-S at 22:01