As I've mentioned before, I like the idea of the DCC-RPG's Mighty Deeds of Arms but think their extra dice rolling and table looking-up will slow down combat rather than juicing it up excitingly.

My goal was to design a feats system that proceeded more or less automatically from what the fighter was already doing. True to my vision of the class, the fighter, unlike the rogue, shouldn't need to think as much. He wades into combat with a few minimal tactical precautions and the normal dice rolls do the work.

The second insight was to reduce the table weight (and page space) by using tables I was already using: my critical hit and fumble tables.

The follow-through power, as I note, is not original, but it's classic and it balances the "unhinge the big guy" of the feats with "plow through the little guys." 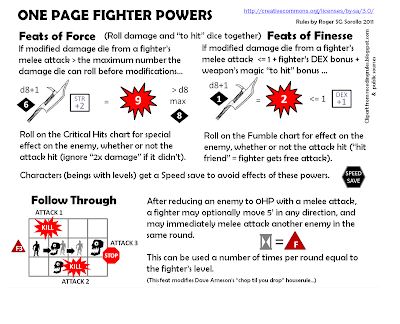 The only extra dice roll is the save, but I felt that was only fair to avoid fighters pushing around much tougher enemies. In a pinch you can say that they only work on a successful hit and forget the save. Does that appeal? Yea or nay ...
Posted by Roger G-S at 22:23