Keeping It Fantastic: The Nethack Way

Trawling through the comments and ideas going around about fantasticism, I can identify three approaches, that each might work for different people at different times. Let's call these Nethacking, Weirdness, and Resonance. Each of these is a way to escape the crystallization of the fantasy campaign into a set of rules that players can peep at, manhandle, and get bored with.

Honestly, the main problem comes from D&D and its system-and-half-a-setting approach. The half a setting - the rules about races, monsters, magic items, and so on - has mutated into Ye Olde Fantasye and a genre in its own right, spawning millions of  DMs' "products of the imagination" that all tend to look the same except for the maps and names. If you look back and see what's casting those shadows on the cave wall, the Order of the Stick cartoon is a pretty fair approximation. 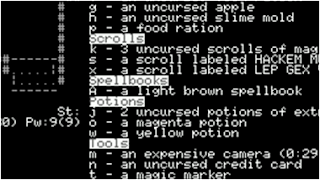 Nethack: Instead of going by the Monster Manual version of what attacks various slimes, jellies and puddings can resist, the DM rolls up the traits of each goo-blob type randomly on a table. Another table tells you whether magic boots go with Levitation, Giant Strength, or what not. I call this "Nethack" because it reminds me of roguelike games. Each new character has to find out anew what the black potion, swirly potion, and all the rest actually do, because these correspondences are randomly generated with each spawn of the game. Telecanter has been producing some fine examples lately (also, also) of this approach.

Nethacking it is the easiest way to go, and it's a required minimum for a DM or game designer who doesn't want players assuming knowledge their characters shouldn't have. Although it's not strictly necessary when running a group of new players, beware if just one troll-burning veteran should join their ranks!

Two limitations on Nethacking's utility, though. For one, you're unlikely to get anything really wild and crazy by just randomly recombining existing things in the game, although a good table can help with that. For another, random generation misses as often as it hits. That's because a random table can help with divergent creativity, but not convergent.

To illustrate, any random monster table can help you Nethack up some off-the-book monsters. I'll use my own, and roll three times. Once for what it looks and moves like ... a beholder. Once for its hit dice, AC and other  number stats. A vampire. And once for its special powers ... a piercer.

Okay, I've got a really tough big round pain-elemental-from-Doom guy who hovers on the ceiling and drops to bite your head off. But my gut reaction is "meh." For one, the surprise part gets in the way of the "zounds! a beholder" mess-with-the-players part. It's original ... but not much more than that.

So the next step is to use your judgment and creativity. Next time, two ways to do that.
Posted by Roger G-S at 07:57