The rogue is not just supposed to be a troubleshooting thief filing his nails until the next 13% chance to detect traps, but a light fighter, a real ranger (not the spell-slinging ridiculoid beastmaster 2d8 munchkin thing from AD&D), a swashbuckling fop, and others of that ilk. These powers are all combat, encouraging use of terrain and positioning, built off the need to survive and run in encounters while scouting ahead, and incidentally work best against a lone opponent. Oh yes, and a rogue is really good at the old thiefly adventuring skills, including noticing detail and mechanics.

(D&D Murphy's Rule #57864: elves are only good at noticing secret doors vertically in walls, not mechanically identical secret pressure plates in floors, which count as a trap. And what if the trap is a secret panel in the wall ... is it a door or a trap?) 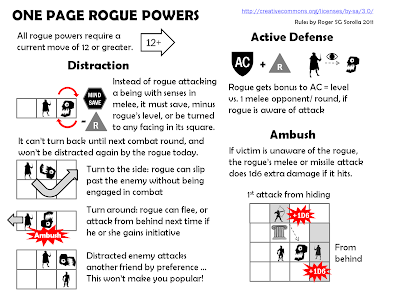 As I mentioned a while ago, I think each of the classes in D&D is best served by mechanics that emphasize the different styles of their players.