This was a real tough page to design. The skills each have a little row of tick boxes on the character sheet. The space limits of that, and this explanation page, forced me to strip down the skills into a bare six things. Even then I'm cheating a little with the skinny font on the explanations. Is all of this necessary? I'm not sure. 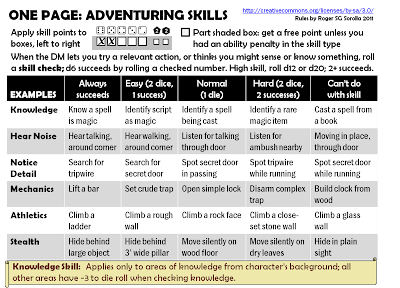 There's a little outside baggage from another roleplaying game I followed. Its designers got into trouble for not presenting examples of each difficulty level of action for each skill, in one of the revised editions. It was the usual nerdrage thimblefest, but made me appreciate that in general such guidelines are a useful thing to have. Here, the examples also let you know what traditionally separate skills fall under each category.

Backgrounds also appear on the character sheet; the player supplies two adjectives or nouns like Woodland Barbarian. Wizard, Priest, Elf and Dwarf have one word supplied for them; respectively Magic, Religion, Woodland and Underground. Knowledge skill points are hard to get. I figure this is a way to realistically show knowledge in a background area that retroactively depends upon ability to learn, but requires too much study to improve while adventuring.

Mechanics with the appropriate Background could also represent some kind of craft skill, if needed. But the four-color universe of adventure has little patience for naturalistic characters who hammer their own armor...

All this rethinking means that characters in my previously presented starting page get way too many skill points, so I redid that too. Most characters start with one part-shaded box in most skills, so it's not like only rogues can climb. 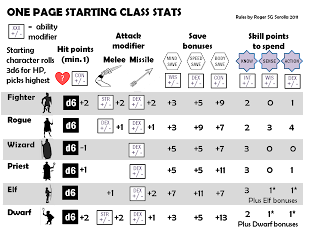 I guess the character sheet should be next, or at least the first page.
Posted by Roger G-S at 22:59

Email ThisBlogThis!Share to TwitterShare to FacebookShare to Pinterest
Labels: one page rules, skills