The Fantastic Through Obscurity

Discussion on how to keep the fantastic in adventure gaming continues, with a renewed desire and specific tips. My further thoughts ... 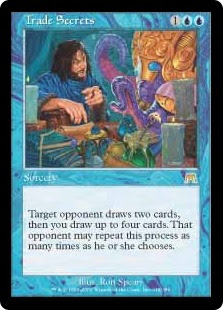 In information security, the phrase "security through obscurity" is used to disparage the hope that vulnerabilities can be protected by keeping them secret. In their early stages of development, many game forms achieve a sense of wonder through obscurity. Magic: The Gathering, for example, initially provided this sense of wonder through opening packets of collectible cards and finding ones you'd never seen before ... or having them show up in your opponent's deck. Eventually, like many security-though-obscurity hopes, this was dashed through the posting of complete spoilers on the nascent Internet, and through the practice that rapidly developed (to Wizards of the Coast's great joy) of buying whole boxes of product in order to get a complete set. Within a few years it was a poor collectible card game whose manufacturer did not provide rarity symbols, checklists, and eventually complete spoilers and previews.

Was there an attempt to keep the fantastic around through obscurity in early D&D? It's hard to deny when reading the Gygaxian objurgations in AD&D to keep players' noses out of the Dungeon Master's Guide. But that is already late in the day. The time of wonder and fantasy is fading, and the desire to standardize the game deals the death blow; the secrets that used to be kept in the Dungeon Master's cranium are now holy writ. In this light the railing against players accessing the mass-produced secrets sold in Barnes and Noble sounds as hollow as Canute's commands against the tide.

In the age of the Internet spoiler the sense of wonder is even more crucially down to the individual game master. In the comments on Monsters & Manuals I made a point that bears expanding here.

1. When players are denied access to the rules that let them carry out mundane tasks at the starting level, this creates a denial of mastery. You can certainly play this way, with players issuing orders and seeing what happens, in a "fog of war" kind of way. But a lot of players are used to a certain level of rules mastery; a generation has grown up with console RPGs. You don't have to deny them this all the way.

2. Expanding what I've said about high level magic spells, denying knowledge of rules and techniques found at higher levels also helps create the sense of wonder. If the game was about kung fu, then not being able to read all about what a high level Taoist master can do would help achieve this.

3. The technique in Lamentations of providing no standardized monsters or magic items points the way to a game system where the rules of the mundane are known to the players, but the fantastic elements are an idiosyncratic revelation from game to game. Yes, creating the fantastic is hard individual work for the DM. But the alternative, especially with experienced games, is a group of players who ready the oil when they see a troll, who can find out exactly how much every gland in every dead monster corpse is worth, and for whom the only surprise is tactical, not strategic.