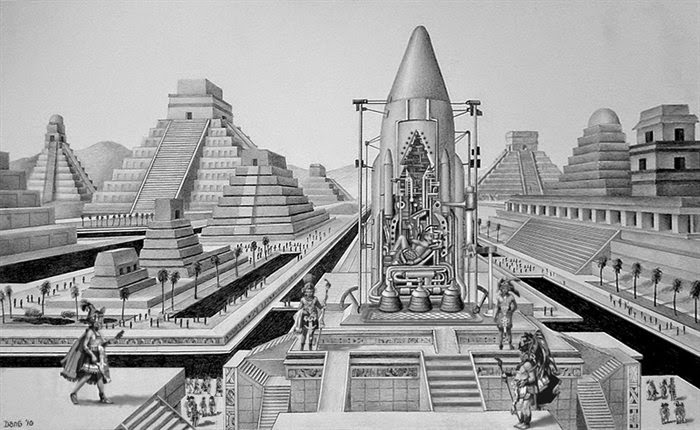 Let's define "autonomous fantasy": a work about a world not our own, without attempting within the text to place the created world in relation to our own world (henceforth known as "Earth"). 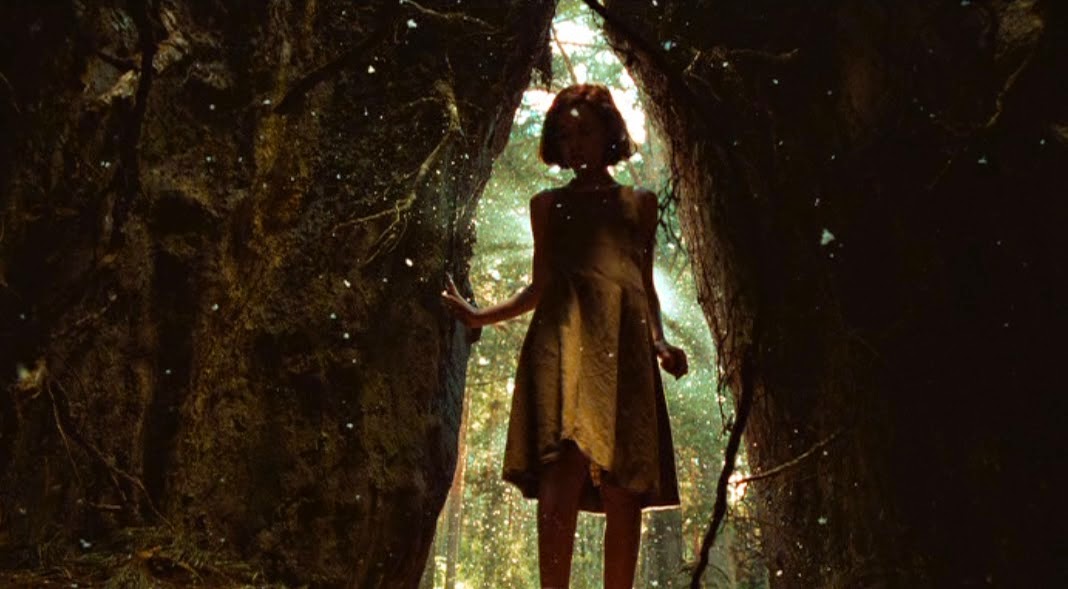 But if you look at literature, autonomous fantasy is actually pretty rare. George R. R. Martin's wildly popular world is one such world. But most of the D&D inspiration list "Appendix N" is not. Most of the works there have some kind of link between the fantasy world and the real Earth.

Below is a list of the ways in fantasy world-building to link the created world ("you") to our own Earth. The list is, of course, exhaustive (this claim is meant to stir the blood to objection, so object away!)

1. You are in Earth's far or mythic past.
Examples: Tolkien's Middle Earth, Howard's barbarians, Moorcock's Melnibone

2. You are in the real world's future
Examples: Wolfe's New Sun, Lanier's Hiero, Gerber's Thundarr the Barbarian, Okorafor's Who Fears Death, Boulle's Planet of the Apes

4. You are on a distant planet where fantasy/magic holds sway
Examples: Farmer's World of Tiers, Barker's Tekumel, McCaffrey's Dragonriders of Pern

5. Your world and Earth are both the dream/simulation/shadow of a higher world
Example; Zelazny's Amber series

6. You are in the dream of someone on Earth
Examples: Lovecraft's Dreamlands, McCay's Little Nemo

The rest have less of a fictional pedigree to my knowledge, but are no less fascinating.

7. You are in a simulation run by someone on Earth
8. Earth is the dream of someone on your world
9. Your world is the afterlife of Earth
10. Earth is the afterlife of your world
11. You are in a fiction maintained by someone on Earth (the literal truth, and the doctrine of Narrativism, no, not that kind of Narrativism)
12. The wall is absolute (Westeros and all other self-contained worlds such as Earthsea)


At any rate, each idea suggests itself strongly as a Big Reveal that is hinted at in the middle of a fantasy gaming campaign, and that outright drives events in the later stages of such a campaign. And in the next post: what implications each of these ideas carry.
Posted by Roger G-S at 22:09 13 comments:

Go on then, have another.

This one is not quite so teeming as the previous, more practical, but such is the nature of the rules page it was spawned from. It's divided up into a number of smaller dice tables that still add up to 52 options. I think these eight categories pretty much cover anything you might throw at your players.

Continuing the slow and artesanal release of the 52 Baroque Pages, the next production is 52 exotic treasures sorted more or less by value. Click to enlarge. Here's the generator link for instant pop-up results! 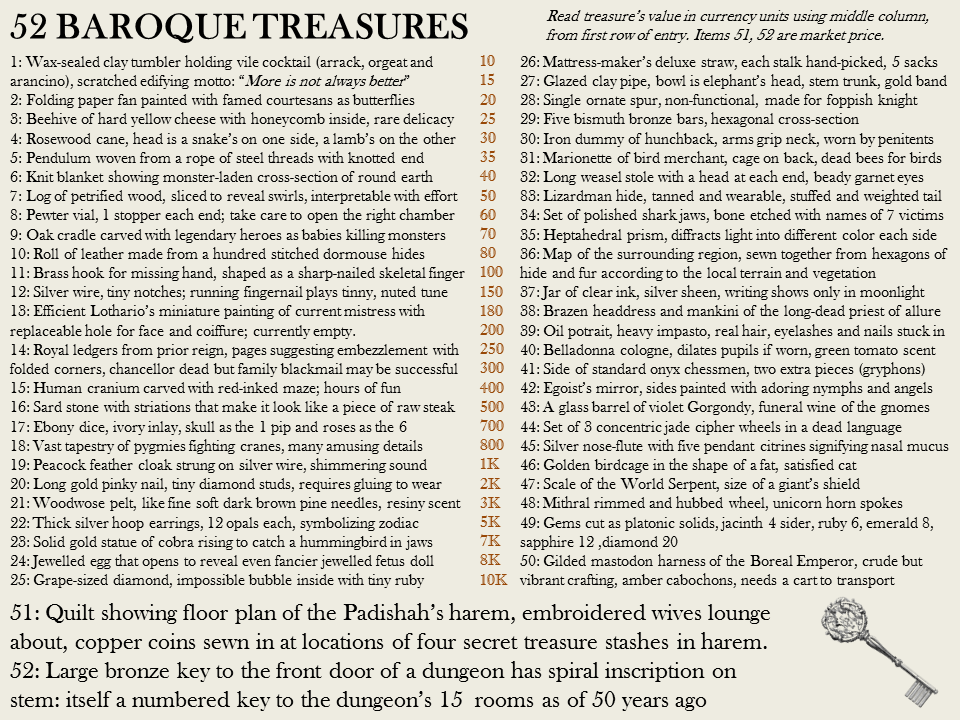 Tell your comforting tales of mad wizards if you like. Human perversity, after all, is small, but unnatural selection is the chain roaches' mother and perhaps yours too. 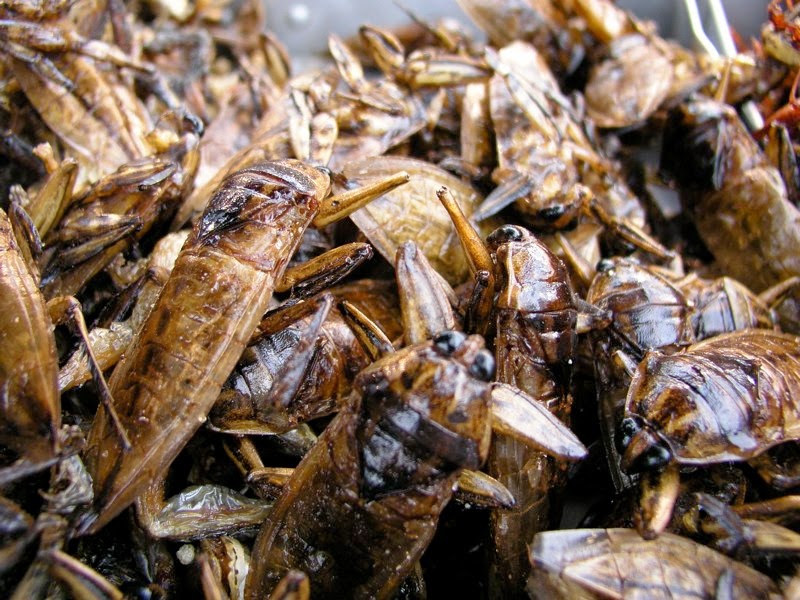 The small form is a blattid centipede of seven to twelve roaches, joined ass-to-mouth in descending order of size, moving and digesting as one.  The chitin is as strong as human skin but give it four points of defense for small size and skittery inclinations, and it moves half as fast as you can trot. It does not have hit points, rather individual roaches, d6+6 of them. When you hit, one roach is squashed, plus one for every 4 damage you do, and roll d8-1 for how close to the head you hit, maximum = number of remaining roaches; all but that number of roaches scatter from the chain.

The main weapon of a small chain roach is disgust. On a successful hit ignoring armor it climbs on you. The next round and subsequent it has a 10% chance each of finding the mouth, nose, ear or nether orifices. Throwing off a roach chain requires a successful bare-hand hit, -2 if it is on your back parts. Invasion by roaches is completely attention-consuming and requires a saving throw to expel the roach chain. Each round you have a 5% chance of contracting disease from each roach chain on you and 15% from each roach chain in you.

On occasion multiple chain roaches will knit together to create a wide scarf roach of 5d6+6 individuals. Its statistics are similar, but more roaches. The front roaches will often acquire a couple of stabbing or slicing implements: broken knife blades, iron spikes, knitting needles, and soon. Thus, when crawling on you a scarf roach does not seek to invade, but instead stabs for d3 damage each time. The chance of infection per round is 10% if a scarf roach is just crawling on you and 20% if it has opened some wounds.

If ten or more roaches are scuttling around the area - either naturally or because some chain roaches have taken damage - any chain or scarf roach in the area will regenerate 1 roach per round from this pool.
Posted by Roger G-S at 09:43 2 comments: