One Page Dungeon 2018: Beneath the Nameless Towers of the Kremlin

This year I thought I would do something gonzo and topical about all the rumors, disinformation, and horrible truths surrounding the Russia of the Czars, the Soviets, and Putin. There is a wealth of material, some of it verified, some of it shadowy, some of it obvious bullshit, and some of it (like Mushroom Lenin) a purposeful hoax. Any adventurers from any world using time or dimensional travel might find themselves summoned to the mad science labs under Moscow, embroiled in a Kremlinological intrigue. 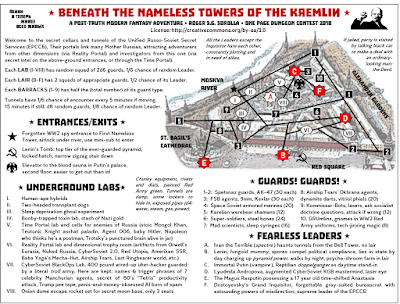 The pdf version.
Linked pdf version with sources for all the history and mythology.
Posted by Roger G-S at 16:16 3 comments:

Continuing the discussion about urban supplements and adventures ...


They are safe places where parties can expect to rest, refit, do business, and train in a predictable way.
They are boring places where the above activities take place, between real adventures, with little fuss or muss.

They are dangerous places of adventure, crime, fights, intrigues, in the tradition of Fafhrd and Grey Mouser and dozens of other fantasy sources.
They are interesting places full of local color and characteristics.

Because of this dual role, and other characteristics such as their non-linear, fractal organization, cities are easy to get wrong in play. Players just want to trade and heal up, but the GM comes barging in with plots and names and scenery and thieves and murderers. Players want to get involved in the city, but the GM doesn't have details, or has so many details that there's no place to start. The encyclopedic organization of nearly every city book ever produced, including the one we looked at last time, doesn't help with this at all.

If you want the city to be safe and boring, in fact, there's no need for any special material about the city, other than a name, location, and approximate size to gauge the availability of goods and services.

Otherwise, it's useful to think about four kinds of "actions" in urban play.

Player-to-GM, mandatory. Players expect they can do a number of things in a decent city or town. Find an inn to rest, a temple to heal, various shops to buy equipment and sell loot, places to train. An urbanity without any of these features is damaged and in need of explanation, as when you buy a sword that is prone to break at the first blow.

Player-to-GM, optional. A lot of urban play revolves around players asking for goods and services that are not standard or listed in the rules. "Can I buy a repeating crossbow? Can I commission one? Can I find an arena fight? Is there a wizard who wants to trade spells with me?" The GM can agree, flatly refuse, or put some kind of test or adventure in the way.

GM-to-player, optional. GMs can also insert clues or hooks to tempt the players into adventure as they go about their mundane business; strange buildings, odd happenings in the street, the old man in the corner of the inn. Or, the players can just get things done and move on to the next dungeon.

GM-to-player, mandatory. This is when characters, plots and situations force themselves on the players. Guards barge in, thieves sneak in, wizards demand their time, the neighborhood is on fire; a thousand ways for the city to compel adventure.

Now, this scheme can help coordinate GM and player expectations about what they think is fun about cities, with players being able to talk about their need for more or less GM involvement at any point in the campaign. But it also suggests a better way to organize books about cities.
The first two of these are kind of what I was getting at in the Street Guide Without Streets years ago. It's also a similar structure to the functional method of room description in adventures. With a little thought about what's useful, writers can satisfy both the GM's need for accessible information, and the player's variable needs for involvement with the goings-on in a city.
Posted by Roger G-S at 09:20 2 comments:

Can We Do Better than the Tyrant's Demesne?

Visiting Paolo up in the northern lands, we went to the excellent game shop Static on King Street and browsed its second-hand trove. I came away with two third-party products from the glory days of my first encounters with D&D, the early 80's days of electric-typewriter-and-Letraset layout, amateur art, and occasional gemstones of creativity amid the dross of naive simulationism. Paolo added thereto a third item from his collection. In the next few posts, I'll now review and muse upon these items in ascending order of interest value.

First up: WITHIN THE TYRANT'S DEMESNE, "a complete campaign module set in the world of Haven." The stats are from the "Thieves' Guild" game but very similar to the levels and abilities of D&D or its then-numerous improved systems. The authors don't get cover billing, but it's a collaboration among four names, chiefly Walter Hunt and Richard Meyer. The artists include -- is that Jeff Dee? no, the similarly cartoon-deco-styled V. M. Wyman (are those sci-fi lady initials?), and some other less talented names. 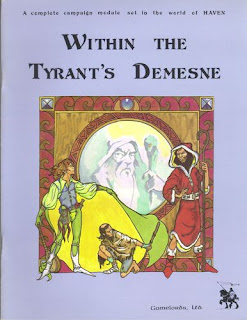 Overall: A standard fantasy city where the intrigues are predictable.

Cons: The kind of gazetteer-style design Zak's Vornheim reacted against. We start with a regional map and history, call out the factions and describe in detail each of their characters, go for a "tour" around the city neighborhoods, involving more building, shop and character descriptions, and finally -- in a 48-page book -- get down to six pages of plots and encounters that deploy what we've seen.

There's very little bizarre about the place, even in its weirdness. There's a tyrant, who keeps power through his brutal guards, the unfortunately named Redshirts, and also through a coopted thieves' guild. There's a merchant society, a bunch of wizard guilds. Reading about the other characters, it doesn't feel much like a tyranny is going on. Political allegiances of most shopkeepers are down to a random table. Explicit descriptions of oppression, resistance, toadying, plotting, and cowardice are few and far between. Probably the most memorable encounter hook is a bunch of blobby chaos creatures who bring back human meat for a butcher, Sweeney Todd style.

Awful wordplay abounds, like the gang modeled after The Who with a "Dr. Jimmy," a "Quiet One," etc.; the potion seller Plazebo; throwing in some obscure US labor movement references, a wizard called Ilgwu who is involved in a plot with the resistance leader Johill. But ...

Pro 1: In a fantasy world filled with Butars, Adars, Radmars, Bonams, Corams, and the occasional Lobar (all from the Tyrant's Demesne, mind you), it can be hard to get names straight. Yes, awful puns can help the DM remember who's who.

BUT, the players must get the puns only too late, or never. So Plazebo is too obvious; the Who goons could be just under the radar. Likewise the most clever name in the module, a lockpicker named Kasserine Khyber, after two famous mountain passes from military history. I once had a party do a whole campaign where Rick, son of Nick lived in a millhouse with a water gate near the Ford of Jerrold and was being investigated by the Wood Warden Burnsteen from the rangers' Post... Thankfully, they never got it until I revealed the scheme.

Pro 2: The intrigues, when actually described, are decent spots of mystery. There's a fairly linear plot to follow and discover a traitor to the Tyrant; a more multi-threaded plot involving apparitions of the apparently dead Johill, with a Scooby Doo-type explanation; and a number of short encounters that highlight some of the other secrets of the town. They're just hiding behind long stretches of description that follow neither the logical order of player engagement with the setting, nor the order of GM preparation to run any given adventure. The helpful table of NPC stats in the back can't mitigate this.

To do better in a modern-day roleplaying work, we have to realize what the city is, functionally, for the players and their characters. And that's the next post.