GenCon this year was one of those experiences where I knew what I wanted to do, I did it in moderation, and it went well, producing a satisfied feeling. I wanted to:

I think my first ever appearance on the official GenCon Schedule was a success, running the Mule scenario. Despite a few glitches in my preparation, the players had fun facing the challenges and coming out with all six slots on the Necromule filled with named corpses.

The midnight run happened on my Five Rings group's party floor, and while a little more distracted by raucous goings on, drinking and equipment mishaps, did take the players to a different area of the Crypts with a strange social encounter and a rousing final combat against plague zombies, who yielded only two nameable corpses.

On Saturday I went and played in Tavis' ACKS scenario using a Dyson Logos map and exploring an ancient tomb. A really good group of creative role-players assembled, including Tavis' 12 year old son, and I'm grateful he found space for me. We ate a burger, discussing insider stuff about the Dwimmermount kickstarter with one of the backers, and then headed off to our party floor to play a really good off-the-grid Ars Magica introductory scenario with GM Rob. Even better, Brian "Trollsmyth" Murphy stopped by briefly to say hi.

* Try new games of all descriptions.

Thursday morning kicked off with a definite "SCORE" at Gaming On Demand- getting first pick and picking Jason Morningstar's run of The Warren, an Apocalypse World game that does Watership Down/Bunnies & Burrows. Jason's scenario was a bayou with appropriate creatures and challenges, including a memorable Cajun raccoon named Boupignon. AW rules sets seem to hit the right notes between rules-light and cool subsystems. In particular my rabbit, Tunguska, made good use of the Seer procedure in which the other players write single words on pieces of paper and the seer has to make up a vision involving them.

I did the usual walking the dealer hall and trying new games. I can report that a) playing a demo and then not being able to buy the game because it will be "out in November" is a frustrating experience b) if you walk on to an empty demo table it may be because the game sucks; good games seem to create their own buzz and interest c) so the only game I played and got was the PvP deckbuilder Star Realms, whose computer version is indeed fiendishly addictive. Also bought the usual ton of miniatures and accessories, and got but did not play Hillfolk - my impulse is to start with anything but the.vanilla-Hebrews default setting.

As well as catching up and connecting with the new brand manager for the L5R CCG, and other people in that enterprise, I went to a seminar "Gaming as Other" where useful advice was given about helping to diversify the gaming world, and made some more connections there. There is even some possibility of a seminar next year on academic research and non-computer gaming. Would be great if I could wrangle my research fund to pay for the trip...

We're all getting older. There is less wild partying,more retiring at a reasonable hour, more reaching out and getting into new spheres of activity. Jet lag kicks my ass, too. But as a way to spend part of your vacation it's not half bad.
Posted by Roger G-S at 09:44 1 comment:

I wanted to introduce D&D to my other brother-in-law's kids (age, 9, 13, and 15 with the latter having played 4th edition before). The best thing for their gaming future was to give them the industry standard experience. So I bit the bullet and downloaded 5th edition Basic, figuring that what with all the conversion resources out there I could lead them to the familiar Citadel of Evil.

They never got there but they had a blast, over two sessions. Below are some of the pro and con features of my experience.

PRO: Character creation is long by old school standards, but the best parts are backgrounds and their associated roleplaying hooks. Backgrounds are great and the implicit idea that splatbooks will focus on them rather than mechanically new classes is genius. Choosing the non-optimal background from the starter set gave two characters some interesting "multiclass" dynamics as an ex-acolyte wizard and an ex-criminal fighter who in action operated more like a combat rogue. It is great to have the mechanical elements pull one way and the roleplaying elements pull another way.

The three starting characters came raring out of creation with reasons to adventure: take back the halfling folk-hero's village while ducking minions of the tyrant; defend the wizard's Zen-like faith against the more military offshoot of the same (literally, a case of Mumon vs. Musashi); find a lost heirloom stolen from the reforming highway robber.

Trinkets are a thing I have used before so they also provided nice hooks, in particular the coincidence of "defend a sacred text" with "diary with seven pages missing" would have been immediate plot fodder in a longer campaign.

Combat, when it came, was very simple and classic-feeling. I ported in some of my "good ideas" like morale rolls, and used Stan Shinn's monster conversion formula for a random stirge encounter and for the climactic battle with the hobgoblins and evil wizard occupying the halfling village. Using this system, 12 hobgoblins and their boss were a very even match for the 3 PCs and handful of halfling refugees, and that only because the kids showed excellent tactical sense, doing a thorough recon, and shooting from high up in trees, by preference at the hobgoblin bowmen. If I had used the 2d8+1 HP, AC 18, +2d6-damage-when-team-fighting ho-gos from the Dragon Queen monster list, the good guys would have been utterly crushed. As it was, two of the PCs and one NPC emerged successfully from the Land of Death Saves.

Knowing how tough monsters actually are in 5th edition, the leveling numbers make a little more sense. The 300 xp needed to get from 1st to 2nd is almost like a 0-level "funnel" now that classic cannon fodder like orcs are best matched to 2nd and 3rd level parties. From there things proceed pretty much as they do in 3rd edition and my own old school rules.

Inspiration I had doubts about, but for these starting roleplayers it was a good, limited and non-intrusive way to have them think about whether their actions in the game reflected their character concept at the end of a session.

CON: My biggest gripe with 5th was the lack of class role differentiation. Spells and special abilities themselves muddle the classes (fighters can self-heal and clerics get a sweet damage spell, for instance), but this doesn't bother me as much. It's more the decision to boil the mechanical class benefits for skills, weapons and equipment down to a proficiency bonus which starts at +2. This means that a rogue isn't much better at lockpicking than a fighter or wizard with a DEX bonus; and in our party, the melee combat beast was the lucky wizard who rolled high stats for STR and DEX as well as INT, meaning he did the best damage with the quarterstaff and, once buffed with Mage Armor, had the highest AC. The Santa-Claus-like handout of ability numbers, "highest of 4d6" plus race, subrace, class and background ability bonuses further tips the balance away from class and toward abilities, so that a +0 bonus was the new -1, and +2 and above was standard.

Being able to cast spells in the face of melee further de-differentiates the classes. We had a two wizard, one fighter party but there was definitely no feeling of "protect the squishy wizards!"

I can see the logic of combat and, as others have said and I found out, it makes for tough experiences. At the same time, the challenge is definitely oriented toward individual fights rather than resource management over a longer haul, due to the healing and spell recovery effects from short and long rests.

But the point is, we had a good time and I feel like I know what I need in order to run this game in a fluid way. I will definitely be getting the Starter Set as a present for the kids ... if I can find a game store that has any in stock, that is ...
Posted by Roger G-S at 18:29 No comments:

All right. I have taken the step of registering my 52 Pages Old School Basic/3E hybrid game run with GenCon. It will be August 15 (Friday) 10AM-2PM in Embassy Suites, Chancellor 1. If you are already logged into Gencon events manager the link is this un. I want to see some of my blog readers in the crazy mix! Here is the splash page for my GM screen. 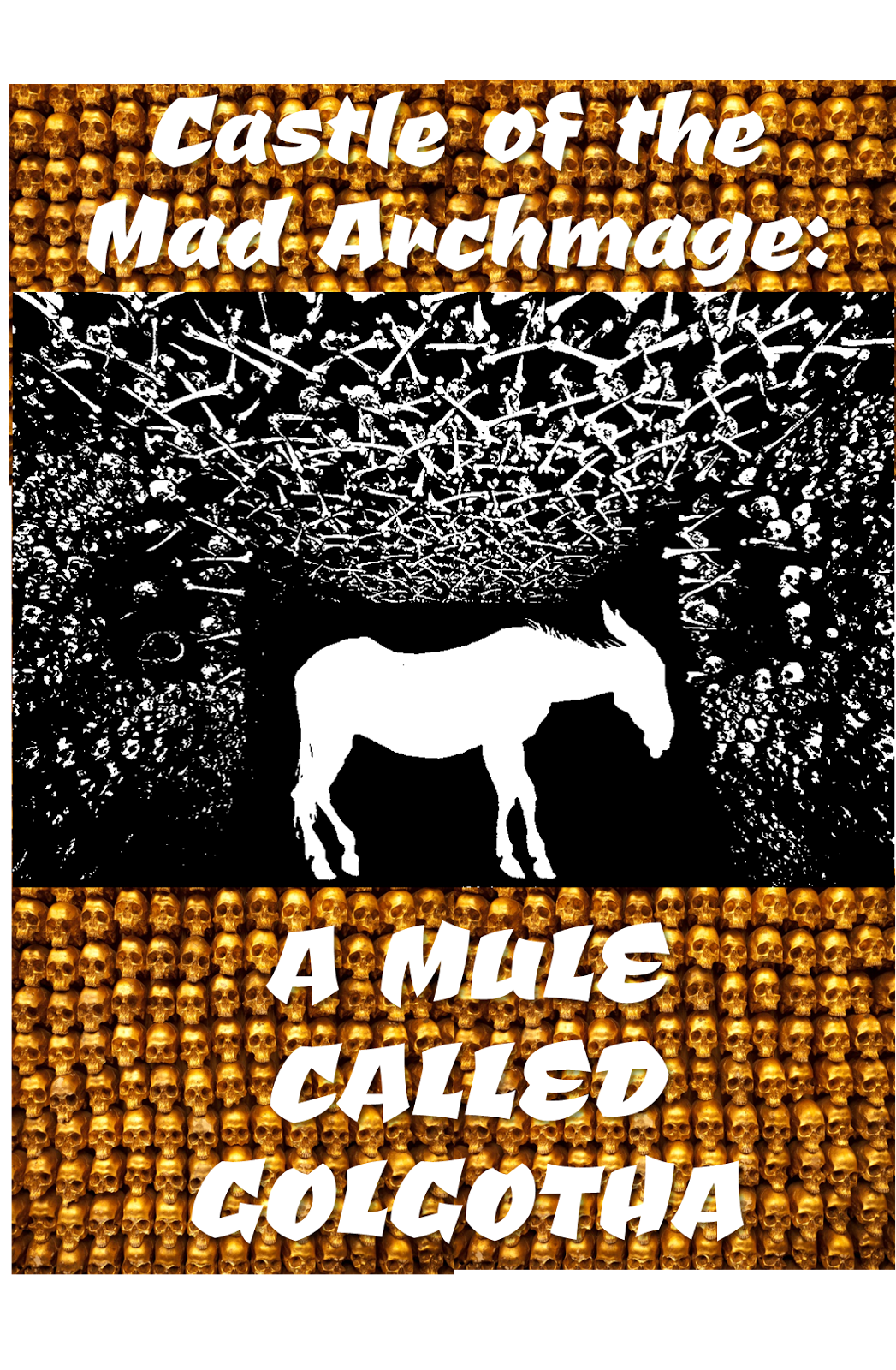 The scenario is a delve into Castle of the Mad Archmage's Crypt level with 5th level pre-gens using the 52 Pages system (see downloads, right). The mule is what you will be using to transport the bodies of the blameless dead back to the surface, but the dungeon might have other plans.

I hope I can get some of you fellow bloggers, readers and commenters out of the woodwork for this one!
Posted by Roger G-S at 21:05 5 comments: