Not Just Ruins, But Strongholds

Joseph Manola is onto something in this well argued, erudite essay on the importance of the ruin to classic and old-school-influenced D&D. Ruins, of course, are part of the post-apocalyptic milieu. And yes, part of that genre is allowing characters to have freedom to loot and wreck without getting in trouble.

But another part of the genre are the strongholds. Auntie Entity's fortified town, Immortan Joe's mesa complex. The zombie plague survivors holed up in the mall. The fall of Rome left not only ruins, but also feudal castles, and some places that were both.

An impressive number of classic adventures are actually stronghold raids. The first full adventure from the supplements, Blackmoor's Temple of the Frog. The Giants and most of the Drow series. The Slaver cycle. Even Castle Ravenloft, although its mood is very different.

Quick break for a definition. The difference between a stronghold and a ruin is that the walls of the stronghold enclose a nominally unified fighting group. Sneaking through, avoiding raising the alarm, isolating the different groups, thus becomes part of the adventure. A ruin may have sub-areas held by organized groups, but either they are working against each other, don't care about each other, or they are but a nugget within a larger disorganization. So, adventures like the Village of Hommlet's moathouse or the Keep on the Borderland's Caves of Chaos don't really count as strongholds, even though they have stronghold-like areas.

True strongholds are challenging, and you'll notice they were all written for medium-to high-level characters. They are crafted to overwhelm players who come without subterfuge or tactics. In fact, if the importance of strongholds in gaming has faded, this may be because the hobby has drifted apart from its wargame roots. Early D&D grew, via Chainmail, from miniatures wargaming scenarios involving sieges or spying against organized opposition, like Bodenburg and Braunstein.

The ultimate proof of the importance of strongholds comes from the "win" condition of the game, right through AD&D: get together enough men, moolah and mojo to build your own. The victorious player ascends to the Dungeon Master's throne, using the iconic graph paper not just to snail-creep a copy of someone else's dungeon, but to plan and build a stronghold and delvings of their own. Some old-school revival games, most notably Adventurer Conqueror King, hold on to this goal. And it's surely no coincidence that ACK's meta-plot of rising through the ranks of an organization by doing their dirty work can lead in turn to more stronghold busting than you might usually see in a modern-day campaign.

As a final example of the yin and yang of strongholds and ruins in gaming, consider the vast and uncompromising amateur PC game, Dwarf Fortress. You can play in two modes. First, dig and maintain a dwarven town complex underground, mining and crafting treasures and defending it from enemies. Then, after it is overrun (near-inevitably) by demons of the magma layer or invading zombie hordes or simply collapses in civil war, play in Adventurer mode within the same world, as a wandering figure bent on exploring its ruined fortresses, defeating their occupiers and looting their wealth. For sooner or later, every stronghold becomes a ruin...

Five more to go in a highly irregular series of 36 d20-based encounter tables. Roll d20, read straight across, or roll 2 d20's and connect the two columns as best you can using the verbs for inspiration.The bold, italic entries are things that can be left behind in a site with currently other inhabitants. This one's about wizards and their doings. For more of these look under the GENRES tag. 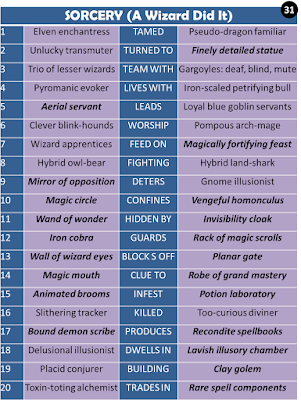 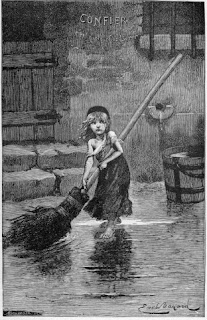 Let me just start with the elephant in the room: If you like GM-PC characters; if for you the whole point of Forgotten Realms is to rub elbows with Elminster, and you would willingly mount a campaign in the world of Conan even though it means the characters are either going to be Conan or someone who isn't Conan, then "Les Mis" is your bag.

The pachyderm in question is Gary ValStu -- sorry, I meant Jean Valjean. He strides through this sourcebook, soaking up attention in every scene he's in. And make no mistake, in spite of the system-neutral descriptions, he's clearly 18 Strength:

"In physical strength Jean Valjean far surpassed any other inmate of the prison. On fatigue duties, or hauling an anchor-chain or turning a capstan, he was worth four men. He could lift and carry enormous weights ..." (p. 99)

But the stat carnival continues:

"His dexterity was even greater than his strength" (p. 100)

So, 19? Book learning-as-dump stat aside,  he's a super-high level rogue who climbs walls like a staircase, bowls people over with force of personality, and survives death plunges. His disad's are many but they're of the kind that only add to his cachet: some kind of helpless dependent or other, false identity, wanted, hunted, and above all a nitpicking adherence to Chaotic Good alignment.

But is alignment really a disadvantage when the book lays out ways and means to weaponize it? Yes, if you stick to your Good behavior even when it would do you great harm - even when your beneficiary is a scoundrel - even when they are actively trying to rob you - even when doing the right thing would ruin thousands of people - Hugo describes benefits ranging from forced alignment change in the target, to confusing and paralyzing adversaries, even to the point of suicide.

Valjean, then, works best as a benefactor for hard times, striding in, doling handouts and plot coupons - but you can't escape the temptation to put him in the hands of a player, if only for the fun of seeing them play him "sensibly" and never attain the full potential that's sitting under their noses.

Then we have the arch-villain NPC, Inspector Javert, Lawful Neutral over into Evil. Say one thing about this guy, he's the absolute right way for the GM to handle a persistent adversary. As much as he's unbelievably skilled and lucky at hunting down his prey - he finds Valjean twice from a cold trail in completely different cities of France - he also will make that little fudgey mistake that lets the players get away, assuming they haven't made any serious mistakes themselves and don't actually (like Valjean) want to get caught.

There actually aren't that many other NPCs for a 1200 page book. This is due to Hugo's habit of having coincidental meetings pop up routinely, so this new person is "none other than" someone we met 200 pages before. Paris and indeed all of France thus behave in Hugo's hands like a village of a couple hundred. Corny as it may seem, at the table this is actually a great way for both GM and players to stay emotionally invested in the developments. Frankly, too, it's easier to remember a plot with six or so recurring names than with thirty-six of them. Those that are described, in more or less detail, are very good - the Patron-Minette gang, with its varied characters and capabilities, almost begs to come to life as a player character party.

Fortunately, the characters, their doings, and other things "storyline" take up only about half of Les Misérables. The rest is great sourcebook material: minute descriptions of buildings, neighborhoods, and historical adventure sites like the Battle of Waterloo, the 1830 barricades, and of course the sewers of Paris; long essays about politics, necessary if you're going to understand 19th century France with its parade of monarchies, empires and republics; and quirky sidebar material like the analysis of convents in France, or the description of Parisian thieves' cant.

Pretty much all the locations are gameable, whether as sites to loot, PC hideaways, or places of intrigue (the scenario where PCs have to help a convent carry out an illicit burial and at the same time help Valjean escape is a tense masterpiece.) Infuriating, though, to see a complete lack of maps and illustrations - the GM will have to dig up historical ones or rely on the "theater of the mind's eye" to fill in. Fan material online can't quite compensate for this crucial flaw.

Overall, while Les Misérables is a worthy sourcebook, it also takes a lot of work on the GM's part. I understand the limitations of system-neutral, but at times it seems the author feels the need to narrate rather than describe happenings in a systematic way the GM can use.  Less plot railroading, less of the author's own political rantings (fortunately, these are contradictory, half pro-Republic and half pro-Napoleon, so it's not as annoying as it could be), multiple system stats, and above all maps and encounter tables, these would take this product to five-star territory.