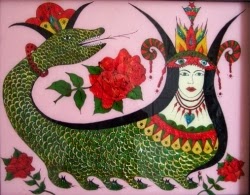 Imaginative literature works best when realism constrains it just enough to create interesting solutions, but not enough to impede drama and archetype. Example: Gene Wolfe's idea in Book of the New Sun that eating someone's brain, with the proper chemical preparations, would convey all their memories, was built up whole from these now-discredited experiments. Realism produced the idea, but was not allowed to stifle it.

In this vein, the old idea of ultravision and infravision from AD&D suggests that races gifted with those abilities can also perceive radiant and reflected light in those frequencies as different colors. Materials they make will be bright with these hues; seemingly dull surfaces actually alive to those who can see.

Technological infrared thermography uses the medium-wavelength infrared (3000-5000 nanometers) to detect heat radiation and the long-wavelength infrared (8000-14000 nanometers) to detect visible objects through emission and reflection of ambient light. Beings with the hypothetical infravision that acts as more than just heat vision thus would possess the ability to detect both sources of radiation, though with fairly low resolution at distance (hence the ranges of only 20 or 30 meters.) Dwarves differ from goblins and the like in the visibility of the light emitted by their eyes to attain infrared vision; goblins emit light in the visible spectrum, the "red glow" that often gives them away.

Indeed, these two sources give two different colors, the medium-wavelength vinth and the long-wave aggal. The rest is speculation.

Vinth is a hue associated in dwarven culture with life, blood, love and warmth, usurping the place of red (which stands for rulership and power).

Aggal is one of the colors of minerals, gems and metals and gives information about their quality that is lacking in the visible spectrum. It is associated with home, structures, wealth and the underground.

In many underground dwarven settlements (including the sealed one, Xabul, currently being investigated by the Band of Iron), it is traditionally considered gauche, at very best a concession to outlanders, to bear visible light sources in public areas. Visible light is reserved for private life, wherein physical flaws and features can be seen better.

Dwarves have developed paints that appear to humans as a matte lacquer, but which reflect in the spectra of vinth and aggal, and have identified similar dyes among the plantstuffs of the upper world. Thus dwarven clothing and outer decoration often seems drab, but is actually rich in infrared color, while their home furnishings and private garments are more gaudy in the visible spectra. Of course, the paints are also used for markings and writings that dwarves do not want outsiders to see. A notable example is the Hall of Diplomacy built in Gorondhevl by King Frumo the Plainspoken; the noble figures of humans and elves in the murals are subtly touched-up in aggal to create lines of caricature that render them laughable, unbeknownst to their emissaries.

Elves do not use the ultraviolet as secretively as dwarves do the infrared. Some examples of writing in secret inks and so on have been recorded, but in the main, elves are content to treat their extra wavelengths as an aesthetic experience. Often an embroidery is seen on an elf's garments which looks to be a complex tracery in monochrome or very similar hues, but which makes more sense in ultraviolet. Ultracolors are shunned by wood elves in everyday dress; however, their festive clothes use them so liberally that other kinds of elves consider this to be in poor taste.

The two primary ultrahues, with many more specific elvish poetic synonyms according to their brightness and saturation, are:

Humans who have been given the ability to see beyond their usual spectrum through a spell, or through a natural variation, often report strange aesthetic feelings, a sense that undermines the realization that their experience sets them apart from other. Those under an infravision or ultravision spell who have seen particularly exquisite examples of art in those colors will often spend time peering at drab surfaces with complex patterns, hoping to see just a little shimmer of those, those colors.

(Tip of the hat to Noah Stevens for suggesting the color names vinth and briolant.)
Posted by Roger G-S at 23:34 2 comments: 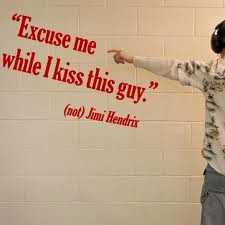 Creates the sudden urge to urinate in a bladder-having creature. Experienced adventurers know it's more than a prank.

Char Monster
If you can't persuade them, envelop them in a pyrocaust.

Wall of Ire
A curtain of red, snarling faces that forces all crossing it with Animal intelligence or above to save or cringe back.

Phased Oar
Allows you to make an oar that phases into the ethereal plane and back in a minute. Invented around the time when the misheard spells fad was rapidly reaching exhaustion point.

Colors Pray
A rainbow blast of seven prismatic hues, each one having the effect of a random cleric spell from the 1st (red) through 7th (violet) level lists, and whether reversed or not also being random. Usually hurts people, but you never know.

Megadungeon Playtest Without the Dungeon

Last Saturday in London we had a small meetup of variously 8-10 Old School gamers who couldn't wait for Dragonmeet (wait, Dragonmeet has an updated website and schedule in early October? Surely these are the last days and times...)

In the corner of a pub near Euston Station, it was decided that I should run the first game, an encounter with pregenerated 52 Pages first-levels going after the low-level bandits holed up in caves near the entrance of my megadungeon project, Manden Gouge.

I haven't talked much about this project - preferring to show rather than tell, perhaps overcorrecting for the tendency of gamers to hype vaporware.  As of now I have about 120 areas written up, enough for the first installment, which now lacks only a bunch of connecting material. The design goals are:
And that's all folks - no Kickstarter, no hype, no set date. You'll see it when it's here.

Anyway, following up a mission hook to deal with some bandits with the advantage of night-vision, the party decided to set a counter-ambush for the bandits and then lure them out of their cave, managing to bag the leader under a dropped goods cart thanks to Barry's creative abuse of the Featherweight spell. So the megadungeon playtest never entered the megadungeon. But I'll be damned if I railroad.

Then Barry took the reins for an adventure in Tekumel using Lamentations rules -- a really nice introduction to that exotic and hierarchical setting that had the party carrying out a tenement eviction, with rainy, moldy atmospherics that brought to mind a cross between The Raid and Se7en.

It was a great day with the opportunity to put faces to a lot of names across the British blogosphere and G+alaxy. I hope there's another such one of these days.
Posted by Roger G-S at 11:58 1 comment: