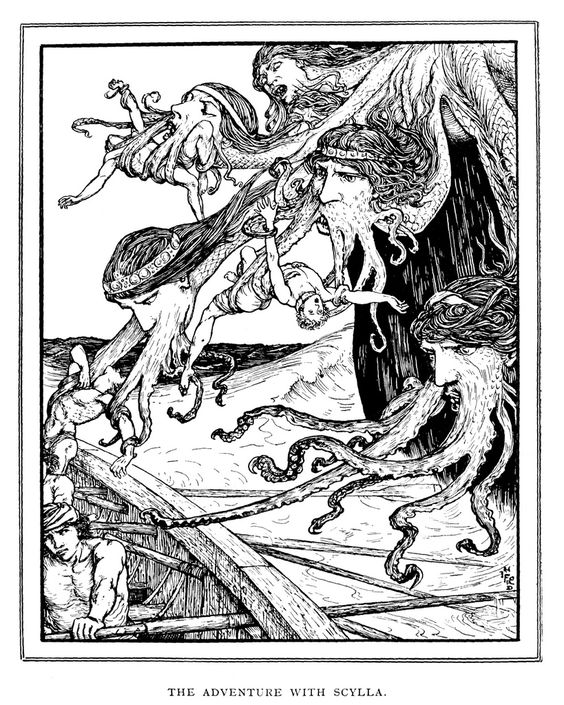 At each 30 points of damage taken she must check morale, and retreats into her cave if this fails. In the cave is treasure that her discerning tentacles have fished over centuries from the wrecks of emptied ships: coins, goods, and the possessions of the slain. She will only listen to parley involving revenge on the sea-god and his spouse, but her daughters may be more amenable to deal-making after a show of strength.
Posted by Roger G-S at 09:36 No comments:

Eric Nieudan over G+ has crowdsourced a most excellent project: to stat up monsters from the lively and terrible illustrations of Henry Justice Ford. Here's my contribution, based on what is certainly one of the weirdest designs given the title. 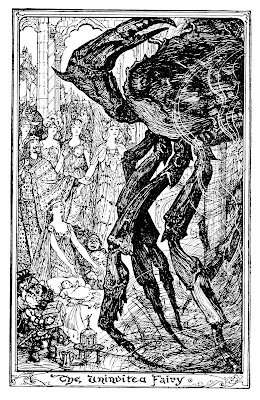 Polite elfin society has named this fey pariah, for the aspect it has taken on: a massive crab, shell the color of the deepest purple bruises, that can flex its legs eight feet tall. It smells of deep loam and perpetually trails wisps of fog, clacking as it goes. It can see all spectra of energy and speaks in a buzzing, down-pitched tone.

The Carcinos Fairy haunts and lurks in dark places at the edge of sylvan idylls: the back of the grotto, the mine in the glade, the sinkhole in the swan-marsh.  Profoundly narcissistic, it would never change an iota to fit in, preferring to play aggrieved victim. It haggles with humans to the detriment of the conventional fey, hates elves, and often gathers dark and embittered minions to its cause, impressing them with magic. The Carcinos is shameless in soliciting praise for its beauty (one must be creative to comply) and ruthless in punishing any equivocation on the subject.

The main strength of the Carcinos is its magic. At will it can use: suggestion, invisibility, dancing lights, faerie fire, water breathing, stinking cloud, and fog cloud. Once a day it can use each of: bestow curse, polymorph other, charm monster, wall of ice. It takes half damage from cold and weapons, and resists all magic (even if no save) on a d20 roll higher than the caster's level/HD. Cold iron weapons do double damage to it.

If the Carcinos is killed, it slowly turns into a tall, beautiful faerie warrior clad in crumbling chitinous armour.
Posted by Roger G-S at 08:08 No comments: