A well-constructed megadungeon gains depth - in the esthetic sense, not architectural sense - from the connections between rooms and levels - again, in the esthetic sense.
Sometimes these connections, too, can inform the wider campaign world.
The challenge for the modular megadungeon is to take bits and pieces from this creator and that creator and integrate them into a whole that gratifies the players' need to feel like they're discovering things, clues and traces in space and time. Some reliable ideas:

The Downstream Lever: A control or trick or puzzle in one area, opens or closes or activates or releases something in another area.

The Historical District: This kennel ... and this kitchen ... and this library ... all belonged to the Demonic Chef of Avalino, and bear his marks and signs.

War: The inhabitants of one area are at war with the other, hold captives and loot, and fortify the border between them...

Peace: ... or due to diplomatic or trade relations between them, letters, gifts, and envoys from the others are to be found.

I'm not sure if any other ideas of this kind exist but if so, post 'em up.

At this point the question has to be asked: what does this mean for the designer of modular dungeon pieces? Do you leave levers up and put a few blank spaces for the megadungeon assembler to note down what the lever does? Or do you leave it up to them to pencil in little notes? I think any kind of module should encourage and help out good practice, so I'm going to have explicit "dangling hooks" in the dungeon, which the user can freely connect to other sections. Likewise for the secrets of the dungeon, the political area and indeed the whole universe. I'll tell you how big the secret is, you fill in what it is and what the clue might be.
Posted by Roger G-S at 07:10 4 comments:

If you recognize that roleplaying games started when wargamers started personalizing rigid sets of wargame rules, refereeing acts of guile and subterfuge as preludes to Napoleonic battles ...

If you also open your eyes a little and notice that some players are not just using the tightly regimented episodic skirmish combat rules of D&D 4th Edition out of the book, but doing roleplaying "cut scenes" to shape the direction of the campaign around them ... 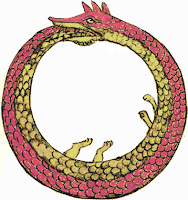 Then "let's drop some roleplaying around this set of wargame rules" is the oldest school play mode around.
Posted by Roger G-S at 15:04 9 comments:

Zak's questions, my answers.
1. If you had to pick a single invention in a game you were most proud of what would it be?

The Gnome as consolation.

2. When was the last time you GMed?
Last Sunday
3. When was the last time you played?
Late November
4. Give us a one-sentence pitch for an adventure you haven't run but would like to.
The crypts and cellars of the City of Vorgrad must be cleared one by one to reinstate the Nine Mysteries of Crime and return it to its former standing as City of Thieves.
5. What do you do while you wait for players to do things?
Roll dice menacingly in a small box.
6. What, if anything, do you eat while you play?
Varies from pizza to junk food; once, a red lentil stew.
7. Do you find GMing physically exhausting?
Not half as much as teaching. In fact I find it actually adds energy.
8. What was the last interesting (to you, anyway) thing you remember a PC you were running doing?
I had an L5R Hida berserker once who said "Treat me as a go stone upon a board of doom." And played suicidally and was the only survivor.
9. Do your players take your serious setting and make it unserious? Vice versa? Neither?
My setting is as serious as your life and just as ridiculous too.
10. What do you do with goblins?
They are generic evil killable sword fodder. Little vicious guys who would like to have a warrior code but haven't realized that's incompatible with cowardice. I would like to have a campaign where they are the evolved form of tomatoes.
11. What was the last non-RPG thing you saw that you converted into game material (background, setting, trap, etc.)?
Hieronymus Bosch's Temptation of St Anthony.
12. What's the funniest table moment you can remember right now?
Hooven using his randomly assigned wooden teeth and a torch to cast a menacing shadow and frighten kobolds ... and it worked! (Gencon 2010)
13. What was the last game book you looked at--aside from things you referenced in a game--why were you looking at it?
The Scaum Valley Gazetteer, because I am thinking of running a Dying Earth game.
14. Who's your idea of the perfect RPG illustrator?
Tramp. As serious as your life and just as ridiculous. Pure joy.
15. Does your game ever make your players genuinely afraid?
Yes, and my wife had a "Black Leaf" moment when her character died.
16. What was the best time you ever had running an adventure you didn't write? (If ever)
I think my recent runs of Castle of the Mad Archmage and Tomb of the Iron God have both delivered a lot of fun.
17. What would be the ideal physical set up to run a game in?
A trunk full of minis, a lit up table to project maps onto, and some way to make it work.
18. If you had to think of the two most disparate games or game products that you like what would they be?
Baron Munchausen and Kingdom Crush
19. If you had to think of the most disparate influences overall on your game, what would they be?
Social psychology and horror fiction
20. As a GM, what kind of player do you want at your table?
Intelligent, creative, fun, with the occasional just fun as a foil.
21. What's a real life experience you've translated into game terms?
Can't really say that I've ever done that literally.I prefer to take the fantasy tropes, the world peculiarities, the horrors and violations, the mindsets of the NPCs, and proceed more or less from there into a logically mapped out insanity.
22. Is there an RPG product that you wish existed but doesn't?
Reverse Tower of Babel to end edition wars.
23. Is there anyone you know who you talk about RPGs with who doesn't play? How do those conversations go?
Less and less embarrassed as I get older. But I only really fly the flag if I think they would want to play.
Posted by Roger G-S at 18:18 1 comment:

Email ThisBlogThis!Share to TwitterShare to FacebookShare to Pinterest
Labels: gamemastering

As a way out of the Geomorphic Megadungeon Wallpaper Blues may I suggest you:


I have done this for the two "Tetramorphs" shown below, and added a further innovation: grayed-out exits (doors, passages) that are only "real" if they are placed right next to a non-grayed-out exit. This is so that you avoid the extreme connectivity of each 100' square having 8 passages to the nearby squares. 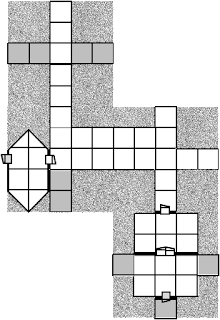 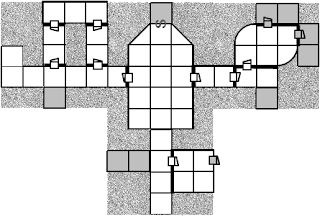 Like them? Maybe there are more in the future.
Posted by Roger G-S at 22:13 3 comments:

"One final enigma surrounding the architects of the Mythic Underworld: their complexes, catacombs, tombs, strongholds and hypogea were all built to more or less completely fill a 340 by 440 foot rectangle. Perhaps akin to the mining extravagance of their corridors built to a width of either 10 or 20 feet, it is clear that some strange concern with geomancy impelled the rigid proportion of their constructions."

In the graph-paper shaped dungeon, after a while players figure out to look in corners for secret doors, and have a pretty good idea when they've explored the whole level. And yet so many megadungeons - even less ambitious adventures - are mapped this way. Castle of the Mad Archmage jams four sheets together for each level. Stonehell uses the one page dungeon template, a square about two-thirds the size of the standard graph paper, but otherwise does the same, and makes each square a stand-alone section. World's Largest Dungeon uses 16 blocky maps, each about twice as big as the standard graph paper but still uniformly rectangular.

Standard maps at first glance seem to solve more problems for the DM than the player. The DM doesn't need to wrestle with large or odd-sized pieces of paper. Players, though, don't know exactly where they enter on the graph paper, so even in the most orderly dungeons their maps will tend to go off the edge.

But in actual play, how much usefulness does the graph paper dungeon add? After all, the DM doesn't usually need to see all of the 440 x 340 foot area - only the immediate area of 5-10 rooms is useful to a session of play.

This argues for the modular megadungeon to be portioned out in smaller sections, such as Talysman recently demonstrates. The overall strategic map can then be as irregular as it wants to be. In fact, the fitting together of the modules in a whole ten-level dungeon can be easily mapped on a 1 square to 100' scale, where each section, approximately 7x7 or 6x8 squares, is a separate level.

A related issue on a smaller scale is the way of dungeon geomorphs, as cool as they are, to create an overly dense and connected "wallpaper" of rooms and passages. The standard format seems to be a 10' x 10' square with exits in the middle of each 5' length of side, 8 in all.  This has been the aesthetic barrier to my using geomorphs, up until now.

One solution would be to just arbitrarily say that 1 in 3 geomorph squares is blank. You deal them face-down from your stack on a d6 roll of 1 or 2, and erase or block off the connecting doors and passages.

Notes from a Hiatus

Some of you may have noticed I haven't posted much here in the past couple of weeks. Cresting the New Year a lot of work (psychology) and "other work" (pro game design) activities have come up and the old blog jones has been put on a back burner ... probably for the whole month actually, bookended as it is with two conferences.

Getting out of the groove of posting every day is definitely a factor. The little obsession of comments, page views, and post counts is easy to put down when other things from the paid side of my life intrude.

We did play yesterday and the party that left off in the middle of the Tomb of the Iron God, fought and ran their way past goblins aplenty to freedom. I had worried that the encumbrance limits were too harsh but they enforced just the right level of concern for the value of treasure and a limit on the dungeon haul. There was a kind of deus ex machina that saved one party member who otherwise would have been left behind, but it's hard to resist that when he became, according to the rules and laws of Mr. Finch's module, the chosen liberator of the Iron God. Well, he was left behind, too injured to run ... just miraculously transformed into an iron statue, which fits the God's M. O. perfectly.

I'll be in LA next weekend but can't stay long enough to catch Satine's charity gaming day. More's the pity.