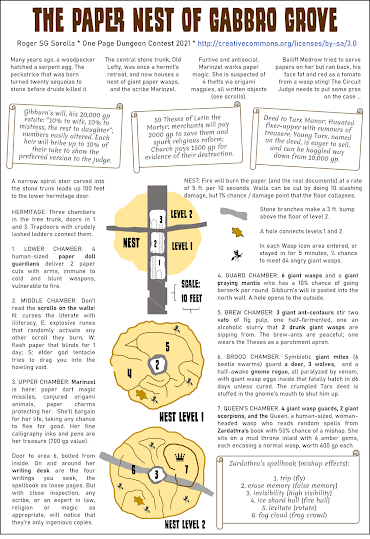 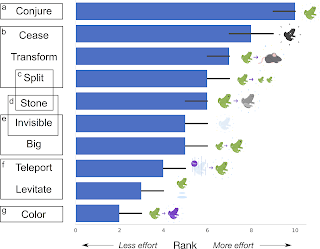 The correlation between these numbers and the intuitive numbers?  A not very impressive r = .43, which means that if you know one of two spells has a higher D&D level, it is only 65% likely it will also have a higher intuitive rank.
This brings us to why spells in D&D from earliest editions to 5th have the level they do, if it's not through some magical model of energy. Yes, it's play balance. Making a frog-sized chunk of most creatures disappear from their anatomy would be more lethal then calling a frog-sized creature into being, even a poisonous one. The same magical physics go into turning a friend and a foe invisible. Merely doubling the mass of a person doesn't have the same delightful possibilities as creating a second, exact duplicate of them.
AD&D spells, as I've noted before, were not always well designed in the level assigned them. There has been a curious conservatism where spells tend to keep their levels and are more likely to be redesigned to fit their level in power, than to be reassigned level, although some exceptions (like Tasha's Laughter in 5th ed.) can be found. I'm sure this can be backed up by reading Delta's individual "Spells through the Ages" posts, although that scholarly compendium is maddeningly lacking in post tags or a search tool. As an example, Shatter was re-balanced as a damage spell rather than item destruction, which although situational, was quite powerful at the right time. Sleep in fifth edition also had its power curve smoothed out -- not so encounter-ending at early levels, not so useless at late. And Meteor Swarm earns its 9th-level slot by doing five times as much damage as the 3rd-level fireball, as opposed to the AD&D spell whose average damage was not very impressive compared to the average 63 points an 18th-level caster could deal out with a fireball.
Still, fifth edition has its shares of third-level wizard spells that are nowhere near as useful as the old standards Dispel Magic, Haste, Fireball, and Lightning Bolt, joined by the new wonder-kid on the block, Counterspell (thanks, Wizards). The best that can be said for a Sending, Leomund's Hut, or Phantom Steed is that the wizard memorization economy allows some room for them, and they can be prepared for a special need regardless. Their utility goes up the more the campaign shifts away from toe-to-toe combat and into travel and politics. In that sense, they seem vestigial only as much as difficult travel, communication with allies, and other logistical considerations are brushed over in campaign development.
Posted by Roger G-S at 10:52 1 comment:

The Dragon Tree was part of the flourishing horde of low-budget D&D-compatible publishers in the early 1980's. You might have read my review of the first book in their Amazon Mutual adventure series, a collection of four quests of wildly varying style and quality, influenced by the gonzo style of the Arduin rules and sporting the company trade dress of a monochrome Day-Glo cover. 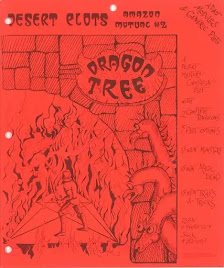 There was only a second Amazon Mutual book, this one in eye-scorching fluorescent red instead of orange. It stands out as one of the few adventures from that era authored by a woman, Mary Ezzell. Her design and writing showcase a playful creativity that was soon to be lost, as TSR's detail-oriented fantasy realism, heroic plotlines, and oh yes, army of lawyers crowded more amateurish third-party publishers out of the game.

The title of the book, Desert Plots, links it to Dragon Tree's "Book of Plots" product, a collection of loose adventure storylines to be run in more detail by the DM. This link augurs in one of the fumbles of the book: the overarching plotline lacks a grand synopsis and is incredibly hard to follow. Two complete dungeons with about 20 rooms each are followed by five sketches of adventure material without maps that can be retroactively read to connect the two sites' goings-on. Along the way, we see four sections titled "What Really Happened"--two of which, unhelpfully, contradict the other two.

As this narrative goes on, the DM is repeatedly instructed to wing the details, and to adjust them not just for the characters' level, but for their play style as "hackers" or "thinkers." Amazon Mutual 1 also took play style into account, true. But the writing in Ezzell's adventures gets vaguer, with more self-serve instructions just when the grand design of the plot requires a stricter accounting, as if the manuscript is running out of pages.

And yet what a plot it is! The action is built around a series of increasingly preposterous magical gimmicks. Starting with a scroll that helps you find other specific written material with the help of a glowing green line, and a manual of very unusual golem recipes, we next see efreet working to exploit complex dungeon tricks, and rooms that go from one plane of existence to another. Much of the wackier stuff can be explained by the heirlooms of a religious order that used unusual magic effects to help people find harmony. The leaps of logic all hang together--barely.


Ezzell uses the implications and side-effects of each gimmick to advance the character-driven plot, which sets up parallel love triangles each hinging on a forceful and creative female character. We have very much just been through the 1970's in this module, what with the flared hand-drawn psychedelic art and chapter titles. There are references to the Doors of Perception, student revolutionary movements, drugs-as-treasure, and heavy quoting of Buddhist philosophy. The meta-idea that the characters are working for the Amazon Mutual adventuring insurance company, which featured so prominently in book 1, is little more than a framing device in book 2.

Ezzell refreshingly refuses to lean on the Near-Orient cliches that are a staple of desert adventures. There are no harems, eunuchs, yelping desert raiders, or wheedling merchants. The orcs, efreeti, and bandits are "all D&D" here. Their uniqueness comes not from any surface detail but from their role in the convoluted and bizarre magical plot. While there is conflict and cruelty, everyone has reasons to do what they do, even if they are the wrong ones. Unusually for 1983, and probably thanks to the woman writer's perspective, a magic effect that could have led to nonconsensual player-character sex is specifically given a loophole.

Would it work at the table? Well, you would need to lay down the clues to the grand mystery a lot more firmly than the book's have-it-your-way approach. You would have to slalom past the 23 uses of "DMO" (DM Option) as a substitute for details, and jot down specifics that work for your group. The system might not matter much, because many of the encounters are designed for the "thinking" party to overcome through negotiation or puzzle solving. And yes, some of the dated references are a little cringey, like Heinlein's TANSTAAFL as a magic word, or a student movement called the "Orcan Liberation Front". All the same, the creativity on display in Mary Ezzell's Desert Plots might just be worth sharing with a set of old-school or even 5th Edition players who can appreciate its whimsy.
Posted by Roger G-S at 13:39 No comments: