In theory: The Dungeon Master keeps careful track of time as the party explores the dungeon, minute by minute, and at prescribed intervals he or she rolls dice for wandering monsters.

In practice: The Dungeon Master rolls for wandering monsters when he or she remembers that wandering monsters are supposed to be rolled for. This usually happens at a time when the party is dithering, arguing, meandering, or otherwise failing to entertain the Dungeon Master. This also happens when the party resorts to noisy, obvious solutions to a problem. 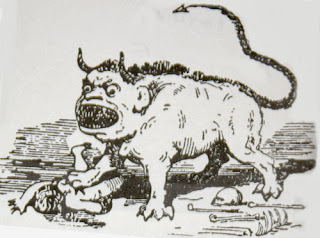 It's my birthday today but I have a present for you, Bilbo Baggins style. I finished the last of the 52 Pages. There will follow a phase of tidying and editing and then the final pdf will be released on the world.


This one's the sample adventure - text a little condensed but I had to respect the artistic vision. I meant it to show a good intro-level adventure, nothing too idiosyncratic, but with some interesting hooks, clues, and challenges. Of possible interest - I de-cliched the last two encounters, originally it was the mirror that possessed you but I switched the function, so now the demon jumps out of the mirror while the dead guy possesses you.

Here is page 52 of the 52 pages. (Page 51 still needs to be finished, the sample adventure, but we are almost there folks.) 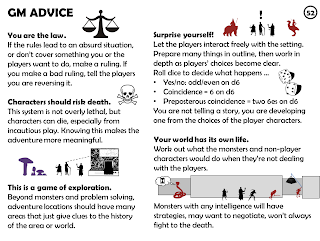 Patrick Stuart is the one to blame for invoking it, and Humza Kazmi for completing the summoning, on G+ recently. So now we have Georgius Agricola's underground monster manual for entertainment.

There is the usual medieval bestiary nonsense about how bears lick their cubs into shape because Ovid said so, foxes fish with their tails, weasels kill basilisks, and also some choice bits:

Haemorrhoid snake: unfortunate name for "a snake whose bite was said to cause bleeding from all over the body" [117]

Fire toad: "On the other hand, the poisonous frog, which our miners call by their own word puriphrunos (fire toad) because of the color of fire which is on it, hides continuously among rocks as if buried and interred... In this way they appear in solid rocks, although there are no holes to be seen." [119]

Six types of demons: "In fact, Psellus, when he classified the number of demons into six types, says that this kind is worse than the others, because the material of its skin is thicker." [121] (Psellus' classification, found here, is into Igneous, Aerial, Earthly, Aqueous, Subterranean and Lucifugus - a whole topic unto itself.)

Hobgoblins: "For they passionately ridicule joy; and they seem to do many things, but do nothing completely." They appear as old men clad in the manner of miners, 3/4 as tall as a dwarf, and were enslaved by the Swedish. [121-122]

The use of these creatures is left as an exercise to the reader.
Posted by Roger G-S at 16:48 2 comments:

Inspired by Appendix N fever, I recently picked up and read Sterling Lanier's Hiero's Journey (1973), which I'd never read before -although I soon realized that as a teenager I'd read some of its derivative works, like the nearer-future World Enough, And Time, and the farther-future Dark Is The Sun. For Lanier wrote the original post-apocalyptic, mutant-fauna, ancient-artifacts, psychic-powers fantasy, in which a heroic priest-mentalist and his psi-sensitive moose steed wander across the Great Lakes region millennia after the nuclear holocaust, gathering a band of unlikely allies to fight a cabal of evil psychic sorcerers. 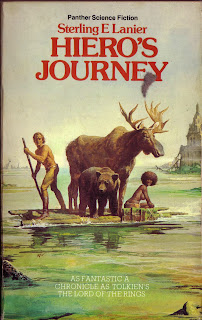 Naturally, it has been noticed that Gamma World was pretty much an attempt to go gaming in this setting. What isn't recognized so much is how Lanier's universe also influenced the constitution of D&D from the supplements onward (although some are hip). Specifically, once you take out the mythical, natural and Tolkienesque creatures from the D&D wilderness tables, what you're left with is a mix of giant-sized animals, animal-men, and oddball mutant creatures. That's pretty much my "WEIRD" table when I tried to sift wilderness monsters into six different genres, and that's pretty much what Hiero finds, day in, day out, in his journey. The ancient ruins, the long distances between tiny points of civilization, all can be laid down to Tolkien; but the roll-four-times-a-day, teeming encounter-fest of D&D, that's Lanier.

Artifacts, too. There's a scene in Hiero's Journey that has to have inspired the artifact examination rules in Gamma World, where Hiero finds a strange device on the body of an evil sorcerer, and tries to find out what it does, at the end going as far as to prop it up and jab at its last button with an eight-foot stick. But this kind of procedure also describes D&D magic items. Unlike the heroes of folklore or fantasy, who come into fairly straightforward items as gifts or treasure trove, the heroes of D&D, like the far-future explorers of the ruins, have to contend with a relic of the ancients being possibly cursed. The artifacts section in the Dungeon Master's Guide even suggests creating random benefits and drawbacks. So, when your adventurers gingerly try out that new potion or necklace, they're acting more post-apocalyptic than fantasy -- acting out of wariness, rather than awe.

And then there's psionics, and perhaps only an obsession with Hiero and the Deryni novels can explain why Gary mixed mental powers with magic in both editions he had his hands on. It's pretty clear that the D&D psionic combat system draws on Hiero's many mental duels with evil forces, which describe different modes of attack and defense. Very present in the novel, too, is the central balancing idea for D&D psionics - while characters can luck into these amazing powers essentially for free, using them opens you up to attention from a whole new range of unwholesome entities.

Finally, one thing the illustration reminds me of: like Ursula K. LeGuin's Earthsea series and, a little later, Samuel R. Delany's Neveryon stories, Hiero's Journey is very much a post-Civil Rights movement fantasy, where North America has mainly been repopulated by ethnic minorities, and pale people are barbaric and seldom seen. A reminder, perhaps, that the old school had a more progressive streak to it - think M.A.R. Barker's Tekumel, based on non-European cultures -  before all the cliches about Scottish dwarves and the like sunk in.
Posted by Roger G-S at 22:44 8 comments:

Advanced Readings in Dungeons and Dragons

This has been going on for some time without the OSR seeming to take notice ... but Tor books is deep into an appreciation of the Appendix N works from the 1st edition DM Guide, courtesy of Tim Callahan and/or Mordecai Knode.

So far they've hit most of the right switches - correctly placed Vance between Clark Ashton Smith and Gene Wolfe (but missing the Planet of Adventure entirely), nailed down Derleth succinctly as an author and influence on D&D, and dug up hidden gold from obscurities like Fredric Brown.

The Dead Hand of Graph Paper

Making your map conform exactly to the dimensions of an 8 1/2 x 11 inch sheet of graph paper is a pure convenience for the referee.

You think it helps the players in mapping, too? I can point to any number of 3 or 4 sheet maps my players have made simply because they did not start mapping at the exact spot in the graph paper that would make their map fit. And giving that spot away is giving away too much information - robbing your players of the mystery experience. As, eventually, they will be cheated of that experience when the grand design all comes together, the edges of the underworld resolve themselves, and they realize that lo, they have been living in a jar of Tang.
For an alternate inspirations here are some real world cave mapping contest winners that Patrick Stuart turned up on G+. It's only a pity that the highest resolution available is not very high, so that we can't clearly see the feature markings and labels. But the dungeonability of the Cold Sink Cave map is clear from both the overhead and side angles...

as is the magnificent side profile of the Merlin cave... 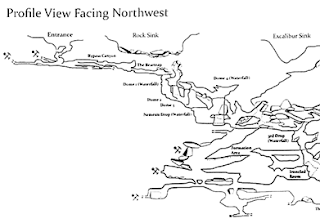 I have recently been working on a project that starts with a cave complex map. Looking at it now, I realize that it addresses my frustrations with the graph-paper format of early modules and the topography of places like Stonehell. Not every corner is filled, true, but my map is still more compact and passage/chamber oriented than the actual cave examples, which is maybe a concession to the explorers' own map. 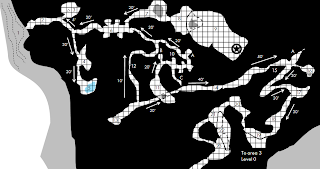 Although I can't deny its traditionalist charm, the flat rectangle is only barely admissible as architecture and frankly implausible as natural topography. Some doubt that exact mapping is useful or desirable; I'm not one of those. Having the world come to life on graph and hex paper is part of the exploration experience in the traditional game that I wouldn't give up for anything. But the quad-rules rectangle should feel like a window into a world with its own existence - not a prison for a plan of an artificial playground.
Posted by Roger G-S at 12:10 2 comments: