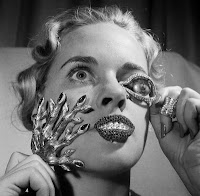 1. Looking at a particularly large piece of banded malachite that had been set as the centerpiece of a table, the land-baroness Xuvena pareidolically descried a more-or-less accurate topographic map of a tract of land she recognized as bordering between three nearby baronies. The treasure she buried there is marked on the map by a small, cross-shaped incision in the malachite.

2. The loose shell of a flail snail, irritated by a chip of crystal, dropped a pearl of like scintillating colors. Viewing it from close up does not lead to confusion, but rather a pleasant, subtly addictive disorientation. The value of this nonesuch is inestimable.

3. Gromstones and hellstones are autoluminescent green and red gems, respectively, that legend says, carry a terrible curse. Their wearer or bearer over months will grow ill, sometimes disfigured by tumors, sometimes by a suppurating rash, or else simply wasting and shriveling away. Only a lead casket, traditional remedy against magical emanations, can keep the stones safe.

4. A new aesthetic fashion in the capital, spread by itinerant philosophers of impermanence and fatalism, has got all the most novelty-crazed courtiers eagerly buying up gems with flaws. The flaws are supposed to represent the inherent imperfection of the universe. Actually, the philosophers are shill adventurers hired by the gem merchants' guild to help offload their faulty product at a premium price. Or so says the rival jewelers' guild, who hires another group of adventurers to discredit the new trend, whether by violence, unmasking, or more likely slander and mockery.

5. Dreading the denouement of a cliche, you nonetheless climb up the idol and pry out its gem eyes, two enormous citrines each worth a bishop's ransom. Your companions steel themselves, but the idol remains blissfully inert, in spite of your many backward glances on the long journey home. You wake up without eyes. The idol can see again.

6. A piece of amber, a trapped fly inside. If magical light shines through it onto a clean white wall, a tremendous shadow-fly is formed, and does its caller's will for a while before dissipating.
Posted by Roger G-S at 00:14 4 comments: 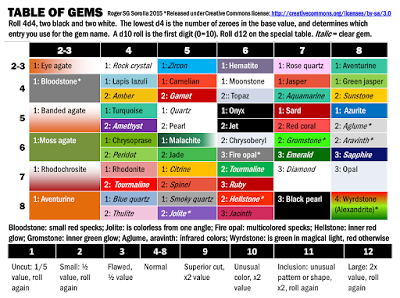