Among the curious, little-used, and often-derided B-list of the AD&D Fiend Folio, there is a monster called the Umpleby that is tall, hairy, friendly up to a point, and can put a real hurting on you with ... static electricity from its shaggy pelt. It appeared in somewhat rough form in the source material, White Dwarf magazine's Fiend Factory (exhibit A below) and got a clearer set of rules and rulings in the Fiend Folio itself, including more detail given to its hair net weapon (exhibit B).

The Umpleby is one of the lesser known Fiend Folio contributions that poses a weird, specific challenge, like the Aleax, Meenlocks, and so forth. It has a little bit of the mess-with-you factor from grudge monsters like the Zorbo or Disenchanter. In the editions since then, it has sometimes gotten dragged out of the attic for sheer obscurity cachet, like the Flumph but more underground. A long time ago here, I dragged it out as an example of a bad monster.

And where on earth does that name come from? Is it just a coincidence that one Stuart Umpleby was the co-founder of an early communication network -- NET-work -- in the 1970's, that used an instructional computer system called PLATO? A network that eventually failed to join up with the Internet like like ARPANET did, and almost got canned by Nixon for hosting calls for his impeachment? Is it coincidence that PLATO's terminals glowed orange? If true, this has to be one of the most obscure current events references in all of D&D. If Stephen Wood's not around to comment, perhaps a mystery forevermore. 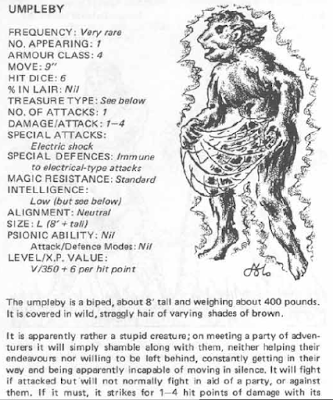 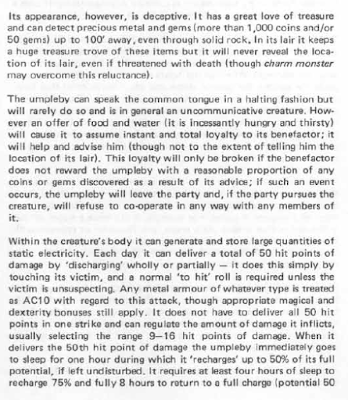 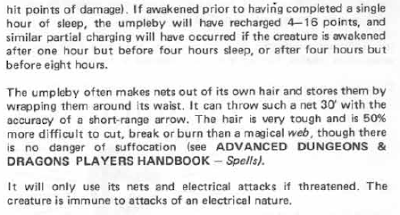