The most spectacular failed monsters are those that bring together elements never yet joined before - the head of a rabbit! the body of a lemur! tentacles that smear you with liquid cement! - but without apparent thought as to how all these elements make a viable whole. In problem-solving terms, the bad monster represents a lot of playing around with the puzzle pieces, but not hitting on a solution that works.

This raises the question, "what works for a monster?" The answers are many, explaining why bad monsters are so hotly debated, as you can see if you even get two flumph haters and two flumph lovers (or at least flumph toleraters) in a chatroom together. 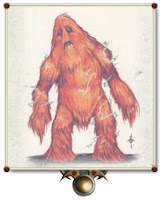 Because of this, I am forced to conclude that no monster is bad in and of itself. Even the Fiend Folio's umpleby - yes, the umpleby, my friends, that hairy master of static electricity discharge - would make a great goofy character in a children's book. Or a cool Pokemon. It's just completely out of place in a dungeon.

(Well, all right, there is one exception that wins the crown of the intrinsically worst monster in all of AD&D. It doesn't have a cult of awfulness, it doesn't inspire mockery or jokes. It is not imaginative or interesting enough to even be magnificently bad. I will reveal and explain in a forthcoming post. Meanwhile, guesses are welcome.)

Now, some of the things that go into a working monster are ...

Problem-solving challenge. A monster's habits or abilities can make it a particularly memorable or versatile adversary. Trying to find its vulnerability (it's hideously ugly, was once human and has smashed every mirror in the mansion ... hmmm ...); being surprised by the classic "gotcha" monsters (whoever would have thought that ten foot pole was a giant stick insect?), or just marveling at its strange tactics (it's using the vines on the ceiling to get away!), are all things that make a monster interesting.

The surprise factor, of course, drops dramatically once the monster is published and becomes generally known. And a DM who relies too heavily on "gotchas" like the mimic ... goldbug ... um, cloaker anyone? ... will end up with a paranoid, slow-moving, and generally disillusioned party, and a silly dungeon. Which, indeed, might be the point.

Resonance with setting. The number one cause of disagreement on bad monsters is their fit to the setting. One DM may play the game as a gritty, boils-and-billhooks medieval affair. Another might prefer a backdrop of vaguely Renaissance, vaguely Orientalist weird fantasy. Still another might run a gonzo campaign where just about anything goes. They will all have different ideas about what monsters are appropriate. Some examples:
Natural or symbolic coherence: The really great monsters have parts that go together, and abilities that go with those parts; symbolically, if not literally. The griffin, for example, combines the nobility of the mammal and bird monarchs, for an ultimate symbol of ultimate nobility. The necrophidius, praised previously, combines two classic symbols of fear, and adds abilities in keeping with those of a snake - poison and swaying charm. It doesn't hurt that it would also be at home in either a medieval or weird fantasy setting, and many people's conception of "proper D&D" combines the two of those elements to various degrees.

The opposite of this is ability-platform syndrome. You come up with a great ability ... let's say, draining magic items. You then ruin that ability by taking about 2 seconds to decide it should go on a glowing blue camel with a prehensile trunk. Or jumble syndrome, where you jumble two or three critters together, add and subtract parts, and voila! The dread one-eyed gorilla shark of Planet Mongo. Again, great for gonzo or heavily sci-fi campaigns, but not so great for the fantasy genre most people are used to.

Next time: The fine art of redeeming monsters; or, Captain Save-A-Flumph.
Posted by Roger G-S at 02:15