Fiend Folio and the Horror Esthetic

As Halloween approaches, paging through the AD&D Fiend Folio in search of gems among the rubble for a series of posts rapidly approaching the point of diminishing returns, I find that some of the strongest entries distinguish themselves by evoking, not weird fiction or science fiction, but the horror genre.
The following Fiends in particular are noteworthy for being written up as little mini-dramas reminiscent of EC comics or Clive Barker stories:


Meenlocks: You haven't felt the same since the party unsealed that foul-smelling tunnel. Now your companions snicker and tap their heads when you complain of whispering, shuffling in the shadows, and dreams that they are coming to get you. You wish that you were crazy ... but you're not ... they are coming ... 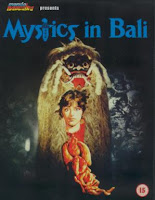 Penanggalan: Although at first you were suspicious of that druid you found in the woods, she soon proved her worth, helping you past the swamp and calming down the crocodiles in the river. Now she has gone back to her home for the night, and shameful, sinful dreams of her persecute you ... and when you wake, you feel weaker ... but vinegar ... why the smell of vinegar on your blanket?
﻿

Revenant: The purse the Thieves' Guild offered you to smuggle their wanted man out of the city was heavy enough for you to jump at the prospect. The law may have lost the scent ... but that stooped, awful-smelling hooded figure that dogs avoid is right behind you ... and you don't really want to know why the thief fainted to see the sword that it carries ...
Each of these "horror story monsters" (literally, in the case of meenlocks which seem to be adapted from this 1973 film) figures in a well-defined haunting that plays out over several days, quite unlike anything the original Monster Manual had to offer.

Ed Greenwood's famous criticism of the FF, offered in the pages of Dragon magazine, was that many of the monsters were incompletely developed. These three write-ups quite conspicuously avoid that flaw. If anything, they fall into the opposite one: the monsters are so scripted-out that they end up dominating and creating an adventure, rather than being worked into it. Compare this to the vampire: we are given a set of abilities and some hints at motives, but the exact strategy and behavior of the creature are left up to the DM. This leaves room for the vampire to be anything from a brooding Strahd to a feral Nosferatu to a cunning super-villain.
The scripted approach may be friendly to the inexperienced adventure runner, and was eventually the way D&D would go under the influence of Greenwood and others, with monster ecologies and tactical notes. But it also leaves little room for creativity, or for surprise if the players have read the monster book. To innovate, the DM has to write over already-written-in space, rather than project into blank space.

I will go further and say that Greenwood's criticism misses the mark. The bad monsters in AD&D are bad not because they are under-described, but because they are misconceived in the first place. If you need any proof, behold the abundance of uninspiring and ridiculous monsters even in the 2nd and 3rd edition epochs, where the norm got close to two full pages of stats, description and ecology. And in the Fiend Folio, no matter how much detail you give the flumph, how much we know about its gizzard and egg sacs, it's basically a little flying saucer alien out of place in a medieval fantasy world it never made.

Well, I guess the point of diminishing returns is here. There were some other worthy creatures in the Fiend Folio - the kuo-toa and drow (though here, also over-written; most of their surprising abilities and details should have been kept in the original modules, for the above stated reasons) - the iron cobra - the githyanki and githzerai - and a decent roster of b-list humanoids and critters for weird worlds without orcs and minotaurs.

And a whole sackful of clunkers. Can they be rehabilitated? We'll see, in the weeks to come.
Posted by Roger G-S at 19:26