Well, you could just not have alignment for player characters. Sure, you can have an affiliation that boils down to a cultural background and reminder - raised in the Church; follows Odin; reveres Chaos. And you can have morality. Your characters' actions have consequences in the eyes of others, after all. Even when nobody is watching there might be a certain karma for really heinous actions. The moral workings of our world are contested and uncertain. Why should the world of adventure be any different?

But okay, in some settings you really need the behavior of holy people to be exemplary in some way in order for them to deserve their magic powers. As I suggested before, a more specific set of principles seems in order.  Most importantly, these principles need to be ranked in some order, to give a guideline for resolving the kind of conflicts I outlined last time. 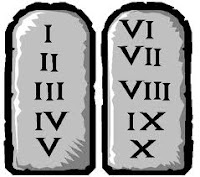 Should the principles be about what you should do, or what you should not do? I lean toward "shalt nots," although really some commandments can be phrased either way. They're more likely to keep characters out of trouble - no spending your last copper for food on alms, or suicidal cavalier charges. Being forbidden from doing something also feels less restrictive than being commanded to do something. Yes, religions often require actions like prayers, religious attendance and so on, but these actions are probably best assumed to go on in the background whenever the opportunity occurs.

Finally, I am assuming that the main fight between alignments in this setting is between Good and Evil, with Law being an additional social source of behavioral restrictions on good and evil alike.

COMMANDMENTS OF GOOD - most to least important

Life: Don't kill or torture a helpless sentient being.
Benevolence: Don't harm, disrespect, or steal from a peaceful sentient being.
Crusade: Don't back away from a fight against Evil that you can win.
Justice: Don't let crimes against Life and Benevolence go unpunished.
Generosity: Don't hoard wealth; spend what you need for your own security, then give to others.

COMMANDMENTS OF LAW - most to least important

Honor: Don't break your given word.
Chivalry: Don't use trickery when you fight.
Restraint: Don't indulge pleasures wantonly. Food is for surviving; drink is for tasting; sex is for commitment; wealth is not for wasting.
Legalism: Don't break the law or let lawbreakers go unpunished.
Obedience: Don't disobey or disrespect your superiors in society.


With these ten commandments in hand, we can see that it's ridiculous to require Evil and Chaotic characters to do everything exactly the opposite, like the Bizarro planet or Opposite Day. Evil, quite obviously, gives freedom to ignore the moral emotions - sympathy, remorse and the anticipation of remorse - that drive ordinary people to do Good things. Chaotic alignment, where separate from Evil, gives freedom to ignore the sense of honor and shame that drives Lawful behavior.

It might be interesting to have particularly Evil or Chaotic characters or beings pick one commandment they feel compelled to violate; the sadist revels in Anti-Life, the Anti-Crusader picks a special fight with the forces of Good, the Unrestrained Chaotic is a compulsive libertine. But that's about as far as it reasonably goes.

So what about Neutrals? They have some moral feelings, but not enough to compel them to do the right thing always. The most reasonable way to show this, I think, is by having Good/Evil Neutrals personally pick one or two of the Good commandments as Scruples that keep them from being completely Evil, and likewise for Law/Chaos Neutrals and the Law commandments.

Finally, people who hold to the difficult paths of Law and Good might just be required to follow all five of their alignment's commandments, or all ten if they are Lawful Good, choosing one set to hold supreme. However, at a small cost to complication but a huge benefit to characterization, players might also be able to choose one commandment that they can ignore as a Foible while still maintaining their alignment, for each set of five.

We're just about ready to step into my three template worlds, each with a different system of magic, alignment, and religion. So hang on - all this theory is soon about to burst into practice. In the meantime, you can let me know if there are any moral principles I left out of the Commandments, and in general what you think of this way to handle alignment.
Posted by Roger G-S at 00:39