Here's part of one of the great comments from poster limpey, that had me rethinking my last post:

> If it were ME (not my fantasy character), I would tend to want to show mercy, but maybe that's just my 'real world' morality intruding into fantasy world ethics.

See, limpey had earlier described a system where players get bonus xp for fulfilling their character's alignment particularly well, and lose xp for breaking alignment. I had an initial allergic reaction - hadn't I posted not long ago that I don't like xp rewards for role-playing?

But then I remembered my own take on moral psychology. According to one book that's been very influential on my own thinking, emotions like guilt, sympathy or shame are hard to control for a reason. These feelings are morality enforcers. They provide an incentive to act in a way that helps other people and most times will only pay off in the long term. After all, why doesn't the first level magic-user cast sleep on all his colleagues in camp after their first big haul, slit their throats, and make off with the loot? Fear of punishment can't be the only reason. The real reason most people don't try stuff like that, sleep spell or no, is that they like these people and they would feel bad even contemplating doing it.

It then occurred to me that in a character-driven game there is no system, other than alignment or something similar, to take the role of these emotions. After all, there is nothing in the game to reward real-life pleasures like getting drunk or getting laid, which is why house-rules for carousing are ever-popular. Without these rules, a perfectly rational player of D&D, seeking to maximize his or her character's gain, should never drink enough to lose control. So wouldn't the same rational player need the punishment-reward structure of alignment rules in order to behave morally through their character? 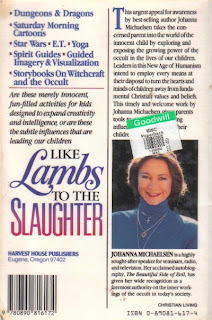 This reflects a long-standing cultural anxiety about games, drama, fiction: that by entering an imaginary space, people will learn to let go their moral hang-ups about sex, gore, violence, witchcraft ... and then take their new-learned immorality back to the real world. An early illustration expressing this concern is, in fact, the header of this blog.

Gamers who are religious believers, secular ethicists, or just trying to run a group including kids they're trying to raise right, have obviously gotten over moral anxieties about the act of gaming. But they might very well wonder - "how do I make my game a positive moral force?" How can the game be a sounding chamber for morality, and not its opposite?

But with all the Old School recovery of "player skills" why not take a look at "player morality"? Unlike boozing or debauchery, the player can feel what the character does in the game, when it has moral consequences. This is most likely to happen when players are immersed in the game, rather than taking a cynical, manipulative approach. What's more, veteran gamers keenly appreciate the need to avoid players who run their characters completely amorally. This suggests that players in a good game will have some kind of moral sense that carries through to the running of their characters - will flinch from playing out torture just as they would flinch from actually doing it.

I'm not super happy with the system I outlined last time, where neutral players still have to live by a couple of scraps of the Good and Lawful codes. It seems clunky and at odds with the idea that neutral players should be free and unaligned. I thought at the time that only Evil players could be completely free - without reckoning with player morality. Now, I offer this view of Neutrality:


A Neutral character is not constrained by codes of alignment. His or her moral judgments and feelings are supplied by the player. The Neutral's intuition and personality can range from kind and honest to sneaky and self-promoting. But the Neutral has enough concern for others to stay in a group without being kicked out - something that Evil characters lack, and therefore something that makes them unsuitable as player characters.

Those who are familiar with Christian theology might recognize something of the virtuous pagan in this Neutral - a person who follows his or her view of natural law (read "player morality"), which might turn out well or poorly. The Christian in this scheme, however, is saved through knowledge of God's laws (read "the principles of Law and especially Good"). Now eternal salvation doesn't really figure in to the D&D game. But more pragmatically, remaining true to a Lawful and/or Good alignment should be especially important to those receiving benefits directly from heaven - clerics and paladins, if they exist in your game.

All right. Next up: alignment, spellcasting classes, and spell list seeds for Sorcery World ... where Good, and Christianity, have not come to pass.
Posted by Roger G-S at 22:07