The Universe
Pantheon World lies suspended in a ring of planes and demi-planes representing the various combinations of alignments. It is there that the gods and demons dwell, and conduct their ceaseless, shifting struggles, with the nations and heroes of the World as pawns. Scholars can also muster evidence for a near infinity of other planes and gods, but the anchor points of the cosmos for all are the eternal truths of Alignment: Good and Evil, Law and Chaos. 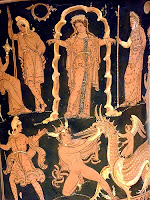 The World
Kingdoms and empires, cities, races and fiefdoms, each take their side in the great struggle. The main war is between Good and Evil, but if the other side presents no seeming threat, the Lawful and Chaotic tendencies tend to fight within each alignment. Forbidden to enter this plane, the Gods work through magical powers they grant to their human servants, and through lesser planar beings that can pass the gates of the world.
Alignment
Unaligned people live by the morality of natural law. The first duty is to help, treat fairly, and not harm those you have personal bonds with – as a member of a village, warband, family, or adventuring party. The second duty is to respect the inherent authority of the leaders and traditions you are bonded with.
The two dimensions of alignment – Good/Evil and Lawful/Chaotic – reflect moral thought beyond natural law. A being might have one alignment (for example, Lawful, or Evil), or two compatible alignments (for example, Lawful Good or Chaotic Evil). Mortals and supernatural creatures can have alignment, but only the latter (including undead) can be holy or unholy.
Good: This alignment extends the duties of care and justice from one’s personal associates to all living beings. It is forbidden to harm or steal from peaceful beings; to kill or torture a surrendered foe, except in certain justice for an individual crime; and to fail to fight Evil when you can win.
Evil: This alignment disdains the first duty of natural law, believing that each individual should look out for themselves. Any mutual aid is at best a temporary arrangement, oaths are to be broken, and bonds of passion and ambition are rightly stronger than the family or friendship. As an adventurer, Evil is not a recommended alignment to have in an adventuring party; you can play that way, but sooner or later, you will end up dead or on your own after one betrayal too many.
Lawful: This alignment requires its character to obey and respect, in this order: his or her own religion; his or her own political leader, if not opposite in Good or Evil; then any Lawful religion, and any Lawful political leader, if not opposite in Good or Evil. Lawful Good beings also have a duty to care for weaker beings who are Lawful and not Evil.
Chaotic: This alignment believes that individuals are to be judged by their acts, not their position in some social hierarchy. The king is only respected if he is competent; the elder only if she is wise; and by the same token, the poor and outcast are not to be despised. A Chaotic person only follows orders if they conform with his or her moral code, or with self-interest if Chaotic Evil.
A player whose character is about to act against alignment, including the natural law of the unaligned, should be warned first by the DM. If the action is carried through, the character is in a state of doubt, and cannot advance in levels until he or she either carries out an act of atonement, or changes alignment. Atonement can be had with a donation of gold pieces equal to at least 10% of one's current experience points, a service done to reverse the original action, or an arduous pilgrimage or quest as required by the religion or leader offended. Any alignment change after the first carries an unrestorable loss of 10% of current experience points.
Spellcaster Classes
Magic-users, including specialist mages, function as in Sorcery World, but work from a spell list from which Black, White, Gold and Brown spells are excluded, and cannot learn those spells. Some non-player character magic-users, however, study Black sorceries, or otherwise bend the rules.
The priest class uses magic differently. Restricted by the same table of spells per day per level as the magic-user, those spells are not memorized ahead of time, but cast at will from a list of allowed spells according to one's religion, requiring a holy symbol. Each spell by name may still only be cast once a day. A good night's sleep preceded and followed by an hour of prayers is enough to restore full spell capacity to a priest. Exceptional Wisdom gives bonus spells to the priest in the same manner as exceptional Intelligence to the magic-user.
A priest must take on and maintain the alignment of his or her religion. A priest in a state of alignment doubt cannot use magic until he or she has atoned, or set out in good faith on a quest of atonement.
The colors of magic available to a priesthood range between one and three, balanced by differences in allowed weapons and armor. Priests may not learn the major first-level spells from the magic-user table.

Each DM will no doubt enjoy creating or adapting a particular pantheon for their campaign world, and each deity within that pantheon can have a priesthood - or multiple orders of priesthood. The following table gives a small sample pantheon based on some of the Greek gods. Note also that classes such as "paladins" and "druids" can be simulated in this system by variations on the priesthoods.
Next: The priests and pantheon of Pantheon World.
Posted by Roger G-S at 21:44